While much of the time spent in space travel is uneventful, voyages are not without incident. The cold, barren nature of the aether means that few creatures inhabit it, but there are still some to be found in the void between planets and stars. 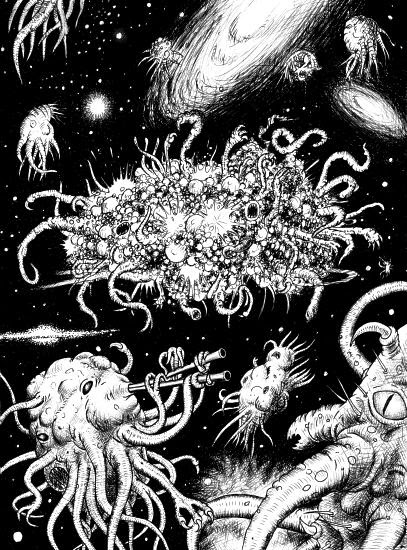 For one thing, elementals find the asteroid fields, stellar clouds, nebulae and other such phenomena to be comfortable environments. A fire elemental might enjoy living on the edge of a sun, while an air elemental could flit about a nebula, an earth elemental might dwell amidst drifting asteroids and a water elemental could inhabit the unstable surface of a comet.

Undead have the same kind of advantage. There are certainly restless spirits remaining from failed attempts at exploration, and some necromancers have even relied upon the undead in their efforts to discover what lies beyond the realm of a planet's atmosphere. Rumors tell of unfortunate ships' crews that have turned into ghouls, the spirits of elf explorers that now haunt space as banshees, and the like. Indeed, some even claim that the dreaded nightshades drift through the darkest reaches of space in search of new prey.

Similar claims are made regarding constructs, which have been sent into this harsh realm to undertake the missions that living beings cannot themselves attempt. Perhaps the most feared, however, are the various dragons—lunar, solar, time, void and vortex—that inhabit the far reaches of space.

Among the first races encountered by early aetherial travelers were the formians, insectoid creatures that follow the orders of their queen and seek to expand their settlements onto other worlds. These monsters represent perhaps the greatest threat to life on other planets, since they seek to conquer habitable worlds in order to build new colonies.

Other creatures to be found in space are listed below.

Finally, whispered rumors tell of beings known as Great Old Ones, creatures beyond the reckoning of most mortals, ones who live in the depths of space and plot ever so slowly to conquer the known worlds of the universe.

Posted by Nate Christen at 3:04 PM