Last week I had the pleasant surprise of seeing the Freeport Bestiary released in PDF format, as a $5 add-on for ordering the print version. Here, then, is a (p)review of that book. 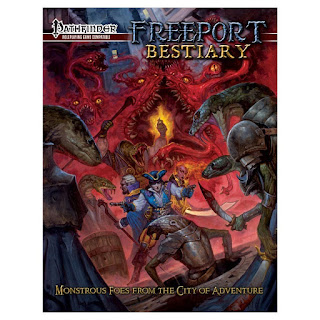 First, the book provides a solid mix of old monsters and new. I always liked the format for the Creatures of Freeport book from back in 3rd Edition, and some of my favorites are back, updated for Pathfinder. Some highlights include the deadwood tree, fire spectre, ghost eater and multiple stat blocks for serpent people.

There are some great new creatures, too, like the bloathsome, sail dragon and werewalrus. All in all, there's a great variety of monsters that can be used to populate the ocean and islands around Freeport (or similar settings).

The mix of CRs is useful, too. Of the eighty or so monsters listed, more than half of them are CR 6 or lower. This isn't to say that there aren't any high-level foes, but I prefer to have more options for the levels at which I'm more likely to play.

This book also retains the "Lore" table for each creature, with DCs for Knowledge checks and the details that PCs can recall about them. That helps the GM generate plot ideas and integrate these monsters into adventures and campaigns.

If I must be picky, I don't love the fact that the creatures are limited to their own specific pages, as is the case in the Pathfinder Bestiaries. This can make finding information a little more challenging, but I can understand why the layout decision was made.

All in all, this book is a solid addition to any Pathfinder GM's library, but especially useful for those who are running nautical fantasy campaigns.

Posted by Nate Christen at 4:48 AM No comments:


Posted by Nate Christen at 7:56 AM No comments:

This post, inspired by the play The Tempest, tales of the mirage phenomenon known as the Fata Morgana, and Arthurian legend, presents a creature for use in space fantasy campaigns. 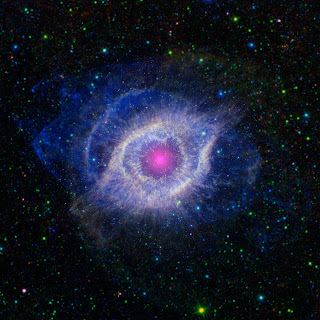 This cloud of gas and interstellar dust might seem unremarkable, except for the fact that it moves of its own accord.

The birth of a star is an event deeply imbued with the potential for creating new life. Indeed, it is this explosive moment that creates worlds, which through their interaction with the sun become the home for almost all living things in the Known Galaxy. For that reason, some scholars who study life in the void believe that interstellar nebulae are inherently male in nature. Others disagree, however, arguing that the process if giving birth is a distinctly female ability. Whatever the case, it is confirmed that sometimes parts of those nebulae develop intelligence of their own, that they obsess about wondering what that life might have been like on their worlds, and therefore use their magical powers to learn more the character of other creatures.

Sentient nebulae wield powerful illusory magic. They use it to test the living creatures who pass through them, creating phantasmal situations which lure beings into making moral and ethical judgments. It is believed that these entities are neutral in nature, but tales persist of ones that seek to corrupt mortals or lead them toward spiritual improvement. Some legends even tell of how a sentient nebula, when an aethership bearing a beautiful woman passed through it, became enamored with her and thus pursued that vessel throughout the void, trying to win her love.

Sentient nebulae are also known to possess a rare and magical substance known as nova dust. This material is imbued with the potential for creating new life, and so possesses curative qualities when used by living creatures.


Plot Hooks for the Sentient Nebula
In a previous post I presented stats for a sentient nebula, a type of elemental that remains after a star explodes. Detailed below, then, are some suggestions for storylines that can be developed based upon that creature.

Posted by Nate Christen at 8:10 PM No comments:

Props go to That Other Guy, who shared this site in a post over on the RPG.Net forum. Here's a site that has all kinds of nautical sound effects.

Posted by Nate Christen at 9:20 AM No comments: