Continuing some of my recent worlds-building, I've been speculating about which monsters from the Pathfinder Bestiaries could be used on other planets. In my next few posts I'll be grouping some of these according to the ecologies that they can be used to build on different types of worlds.

Otherworldly Monsters
At first glance, the notion of populating planets in a space fantasy RPG campaign with new, exotic and challenging monsters might seem to be a daunting task. A quick review of the Pathfinder Bestiary and its sequels, however, provides plenty of options for inhabitants of different worlds. The trick here, though, is to make sure that the campaign setting's Homeworld is inhabited only by familiar creatures (that is, ones that players recognize from known mythological sources). More unusual monsters, then—that are neither constructs, undead, nor outsiders—can become inhabitants of those alien worlds.


Posted by Nate Christen at 1:47 PM No comments:

This post links to a PDF compilation of recent space fantasy material, including an asteroid settlement known as the Grotto, an article about creating a calendar for a campaign world, and writeups for four factions in that setting.

Posted by Nate Christen at 6:34 PM No comments:

This post presents another faction that could be used in a space fantasy or nautical Pathfinder campaign.

The Navigators
Ostensibly a professional organization dedicated to studying the galaxy and practicing the art of charting courses between bodies floating in the aether, this group is in fact the cover for a secret society. Them are obsessed with the idea that interaction between the (as they see it) male sun and the (in their view) female earth is the source of all creation. While some promote belief in the Universal Architect, they see the aforementioned relationship as a necessary emanation from that being in order to facilitate the rest of the creative act. Such notions are, it should be noted, controversial.

Goal: Discovery and, um, Knowledge
While their publicly stated goals focus on exploring the galaxy and promulgating knowledge of the planets, asteroids and other bodies that can be found in it, their unofficial activities that focus on the male-female relationship mentioned above. Indeed, in said act they see a ritual that can promote the essential virility of life in the universe, one that should be conducted over and over in order to promote such vital energies. As such, they're also dedicated to worshiping the Goddess of Love and Beauty.

Alignment: NG
Given the nature of their rituals, members of the Navigators are not accepting of social strictures that impede natural desires. On the other hand, given their respect for all living things, they also don't like doctrines that are enforced against the will of common people.

Leader
Although the hierarchy in this organization is not as strict as those in other groups, the acknowledged leader is a mystic theurge named Giovanni di Savilla—an individual who combines the studies of a diviner wizard with the passion of cleric who worships the Love Goddess.

Headquarters
Instead of just one location that provides a focus for the group's activities, the Navigators maintain a variety of places in which they conduct their trade and undertake their rituals. A typical example of this is a well-regarded bookshop, one in which buyers can find a variety of tomes and maps detailing the worlds of the Sol System, along with assorted curiosities and other, more mundane texts. 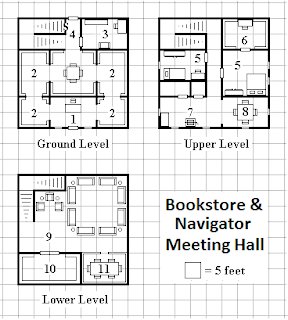 1. Front Room
In the front of the shop there is a table at which the shopkeeper is stationed to receive customers.

2. Stacks
All manner of books, maps and other such items can be found throughout this area. Additionally, in the space behind the front room is a table at which visitors can sit and take their time in examining items.

3. Office
This room is furnished with a bookcase, desk and storage trunk. The latter item is sealed with a good lock, and contains the bookstore's working capital: 124 gp, 381 sp and 274 cp. There's also a ledger with a record of the shop's legitimate business transactions.

4. Stairways
In addition to the stairs that lead up to the building's upper level, a secret door (DC 20 Perception) provides access to the basement, in which the organization's more private entertainments occur.

5. Bedrooms
Each of these rooms is comfortably appointed, due to the relative affluence of those who run the bookshop. Furnishings include a bed and a wardrobe—along with a desk in the smaller room.

6. Study
The larger bedroom (see above) connects to a small library, a room lined with bookshelves and filled by a large writing desk. It is from here that the group's leader steers the organization, writing texts that present sacred instructions, responding to letters from the faithful, and the like.

7. Kitchen
Given their hedonistic tendencies, it should come as not surprise that this group provides plenty of food and drink for its members. As such, the kitchen is outfitted with all manner of pots, pans, dishes and utensils, along with a pantry stocked with beverages and foodstuffs, and a closet containing linens, silverware and the like.

8. Dining Room
A table and chairs here provide a place where the shop's everyday inhabitants can take their meals.

9. Lounge
This is where the society holds its meetings. There's a smaller semi-circle of chairs for more intimate groups, or a ring of couches for larger gatherings.

10. Storage
The shelves that line the walls of this room are stocked with all manner of beverage, along with dainty preserved foods and sweetmeats. There are also candles, incense, linens and the like.

11. Meeting Room
A broad table surrounded by high-backed chairs fills this space, which is reserved for those times when the group holds more formal meetings.


Using the Navigators in an Aetherial Adventures Campaign
This organization can provide plenty of plot elements for a space fantasy RPG campaign; presented here are a few of the possibilities.

Posted by Nate Christen at 3:10 PM No comments: 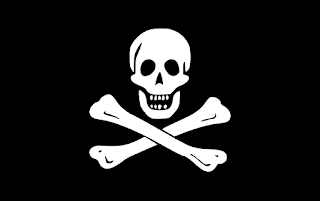