This year's campaign (for the 2018-19 school year) has been a bit different. For one thing, we've been playing every other week; for another, we switched it up a bit and played some Savage Worlds in the Sixth Gun campaign setting. I had a number of adventures ready to go from the start, with an idea of where I wanted to be at some point around the middle; the rest has evolved as we progressed. In the end, though, I wanted to provide something of an overview if a GM wanted to use this material in some kind of organized manner. 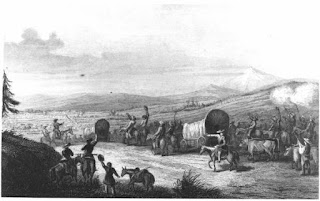 “Reversal of Fortune” provides an excellent means of bringing the PCs together for the first time, since they could be competitors, companions, spectators, would-be thieves, other passengers, or even crew members aboard the steamboat River Maiden for the big poker tournament. Then, finding those responsible for the strange attack can bring a common purpose, as detailed in “Ill-Gotten Gains.” A cryptic clue from that scenario leads to the little town of Smith's Crossing, where they can gain hints about one mystery.

From there, too, they could be drawn into the events of “Blood on the Snow” and “Buried But Not Dead.” Those scenarios introduce two of the primary villains, the Pinkerton Alexandra Flynn and the werewolf Hugo Francois LeBlanc. The latter also allows the PCs to acquire a fabled grimoire, the Clavicula Salmonis, a text purportedly written by King Solomon himself and one that contains rituals for summoning demons and binding them to one's service. They could also thus be drawn into the events of “Restless Spirits,” which gives them the opportunity to win powerful allies.

The plot thickens when Smith's Crossing is stricken by illness, as presented in “A Plague Among You.” Here the PCs can learn the truth about Mr. and Mrs. Smith and, based on what they learn there, rush off to prevent a calamity in “Hell to Pay.” From there, the scenario “South of the Border” can be used for a change of scenery, possibly letting the PCs come face to face with Alexandra Flynn, and even acquire two relics—the onyx mirror and a hand of glory.

Once the end of the campaign approaches, the PCs can rush to stop a werewolf and his allies from unleashing a wicked and powerful loa, as described in “Unfettered,” and then face off once and for all with the Knights of Solomon.

Using the Supplements
Supplements from the blog connect directly to the different adventures, too.

Including the PCs' Stories
The Savage Worlds game mechanic known as Interludes provides a good opportunity for the players to weave their characters more deeply into this story, by telling their own tales. Refer to page 105 of the Savage Worlds Explorer's Edition book for details. Good opportunities for Interludes occur during the journey through the southwest during “Buried But Not Dead” and the voyage across the Gulf of Mexico that's part of “South of the Border.” At the GM's discretion, other scenarios could provide more chances for this kind of elaboration, too.

On the one hand, characters who are developed from these stories could be substituted for NPCs from the published adventures. On the other hand, the GM could improvise entirely new encounters and scenarios based on those stories, too.

Building up to the Big Finale
Here are a few tips for building up a satisfying climax at the end of the campaign.

Heading in Other Directions?
As written, these scenarios should provide the PCs with enough Experience Points to receive from ten to twelve Advances, and thus to achieve Veteran or even Heroic rank. A GM who wants to take this campaign to the Legendary level might, therefor, need to supplement this material. One option for doing so is working in more side adventures based on the stories from the Interludes; this might include making journeys back east to visit family and friends, seeking lost loved ones who've come out to different parts of the frontier, or going to find vengeance against those who've done the PCs wrong. Another possibility is to let the PCs explore the myriad possible worlds that are accessible via the Winding Way, and thus even to pursue alternate realities that upset the status quo of the outside world.

Posted by Nate Christen at 8:25 AM No comments:

Since I do a fair amount of writing for my home RPG campaigns, I thought it might be interesting if I shared a little about my methodology for it. I'm always interested to hear how other GMs plan for and keep record of their sessions. 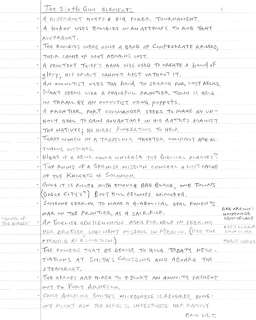 1. First, I try to have paper and a writing utensil on my person at all times. One never knows when inspiration will strike, and I like to be ready to jot down or develop an idea when that happens. To that end, I generate a list of bullet point ideas for future reference. 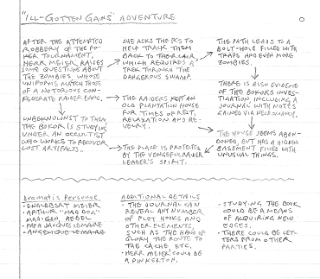 2. Once I have an idea for an adventure, I use a technique that I stole from my brother Nick. It's a flowchart that starts with the adversary's actions, draws in the PCs, and then leads through various possible developments to what one hopes is a satisfying conclusion. This all keeps in mind, of course, that no GM plan ever survives contact with the players. 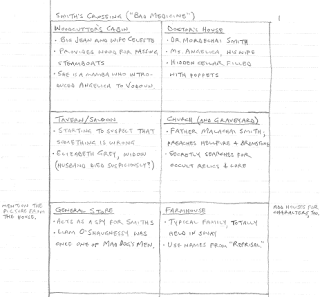 3. Sometimes--and especially for my recent Sixth Gun campaign, I've wanted to develop a location for use in a particular campaign setting. For that purpose I use a chart, one that has sections for different elements of that place. This helps me organize my plan for it. 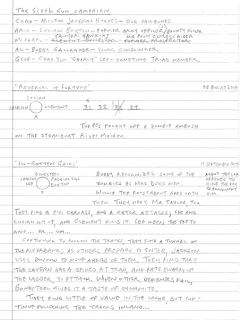 4. Finally, during each session I use my notes to keep track of damage to various characters in battle, skill checks that characters make for later reference, possible repercussions for future sessions, and the like. Here's an example of that.

Posted by Nate Christen at 2:20 PM No comments: