Available today on DriveThruRPG.com is Treasure Hunter Adventures 3: Underwater Salvage! This supplement includes details about lost ships and sunken cities around the world; deck plans for old sailing ships and a modern dive boat; crew stats; new gear, hazards, Edges and a Hindrance related to underwater exploration; and an example of using a ship's log as a puzzle. 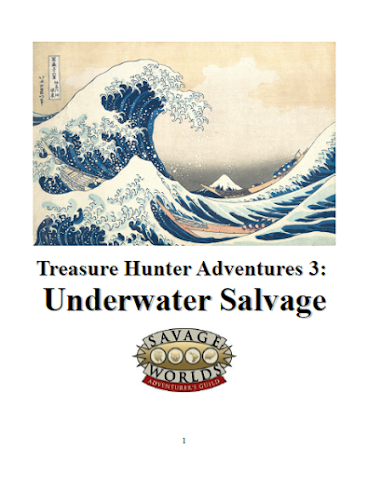 Posted by Nate Christen at 4:40 AM No comments:

Here's another preview of Treasure Hunter Adventures 3: Underwater Salvage. This one presents deck plans for the dive boat that could serve as a base of operations for the heroes, or their rivals or enemies. The PDF will also include location descriptions and stats for the crew. 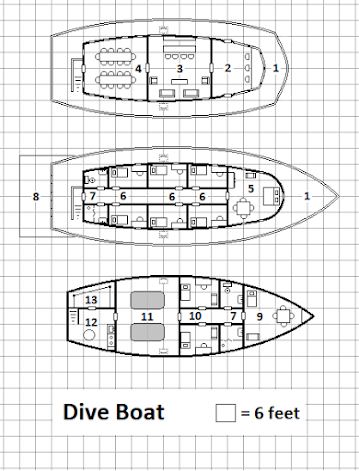 Posted by Nate Christen at 5:34 AM No comments:

Here's the first preview of Treasure Hunter Adventures 3: Underwater Salvage, which is in the final stages of editing. This is a map of the world, marked with the locations of ten different lost ships or fleets, or sunken cities, for treasure hunters to pursue. 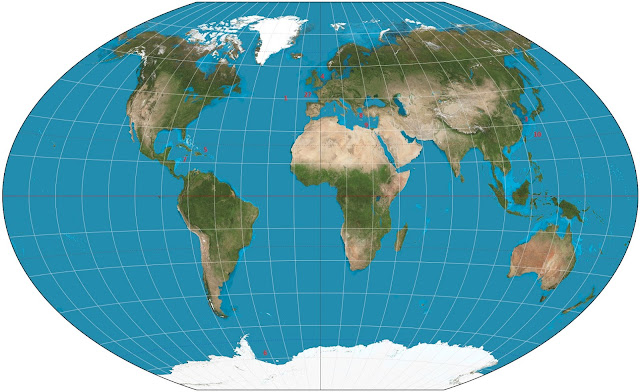 Over 70% of the Earth is covered by water, and countless sailing vessels have succumbed to the oceans' cold embrace during people's long history. What is more, numerous settlements have also been drowned by the seas' mercurial changes. Refer to the map above for estimated locations of the following lost ships and sunken cities.

In 1523, following the conquest of the Aztec capital by forces led by Hernan Cortes, a trio of Spanish galleons set sail from the New World bound for Spain; they carried looted gold, silver, gems, and other valuables—including, it is believed, the weapon known as Xiuhcoatl, which had been taken from the Aztec ruler Moctezuma himself. Those vessels were attacked by a French corsair named Jean Fleury near the Azores, however, and at least one ship is believed to have been sunk during that battle.

Posted by Nate Christen at 11:59 AM No comments: