Pirates of the Caribbean Comic #1 Review

Pirate-themed comic books are something of a mixed bag. There are good ones, like the short-live El Cazador series, less thrilling ones such as the overly violent and sexual Rawbone, and eclectic ones like Pirate Eye. I watch out for them, but not with much energy since they're few and far between. That's why I was surprised to hear of a new series based on Pirates of the Caribbean. Some might think of starting a comic based on those four (and soonish to be five) films to be unusual, seeing as many found the last movie or two to be evidence the series is growing long in the tooth. It is, after all, thirteen years since the first film premiered in theaters. I was intrigued, however, and picked up the first issue. Detailed below are what I see as the strengths and weaknesses of the first issue. 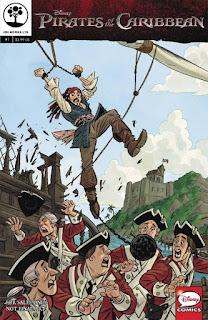 
Weaknesses
All in all, I enjoyed the first issue; it has an engaging story that could provide fodder for adventures in the Skull & Bones or Pirates of the Spanish Main settings, and that's what matters most to me. We'll see if the second issue matches up to that.

-Nate
Posted by Nate Christen at 6:17 PM No comments:

Bringing things back to the d20 System, here's a PDF with deck plans and d20 stats for the steamboat and its crew (using the rules from Sidewinder: Recoiled).