This movie came out twenty years ago in campaign history. At the time I missed it, but I noticed Treasure Planet again was because the title popped up as a link in an article about the Spelljammer campaign setting on Wikipedia. That was back around 2014 when I started developing ideas for what became Aetherial Adventures, my homebrew space fantasy setting for the Pathfinder RPG. I think it was mentioned there because it has a similar feel to Spelljammer, and so I gave it a watch. I love it! In hindsight, it also gave some valuable inspiration for running space fantasy adventures and campaigns.

*In fact, based on the Wikipedia article, it sounds like there were already plans in discussion for a sequel, which is described as follows:

“In the sequel, Jim Hawkins and Kate, his love interest and classmate at the Royal Interstellar Academy, must team with Long John Silver to stop the villainous Ironbeard from freeing the inmates of Botany Bay Prison Asteroid.”

Posted by Nate Christen at 8:54 PM No comments:

Preview for Rise of the Mimic Moon 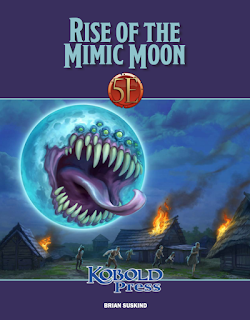 This scenario was recently released by Kobold Press, and it looked too intriguing to pass up on it. Here are the thoughts I had while reading it.

All in all, it looks like it will be a lot of fun, and provide a good chance to link together five previous Freeport campaigns with my current Spelljammer one.

Rise of the Mimic Moon

Posted by Nate Christen at 6:08 PM No comments:

Over the past four sessions my party played through the free adventure Spelljammer Academy; here are my thoughts about how it went.

Here is the link to my campaign notes, by the way.

All in all, I was satisfied that these scenarios gave my players and their characters a good introduction to the Spelljammer setting. For DMs who want to draw out the training process, though, there's a good resource called Spelljammer Academy Expanded, available on the DMs Guild website. It presents stat blocks for more of the NPCs, ideas for expanding and adding encounters during the training, and ideas for transitioning from there into the Light of Xaryxis adventure. 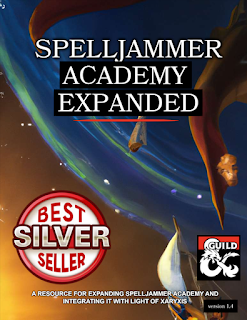 Posted by Nate Christen at 4:53 AM No comments:

It would not be fitting for a blog that presents Treasure Hunter Adventures material to miss today's anniversary. One hundred years ago, Howard Carter found the tomb of King Tutankhamen. 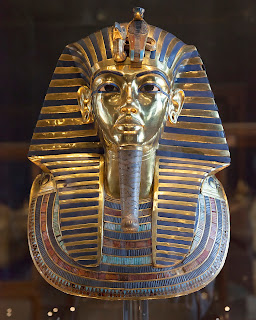 Posted by Nate Christen at 8:17 PM No comments:

Continuing my experiment, this two-page supplement for use with Spelljammer presents a wildspace hunting ship, with deck plans and descriptions, stats for the captain and crew, and suggestions for working them into adventures and campaigns. 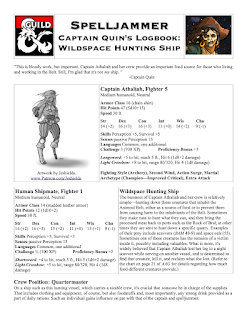 Posted by Nate Christen at 5:05 AM No comments:

I've been doing some research to learn more about the bugle calls used by the United States Cavalry, to provide some color for adventures taking place on the frontier for The Sixth Gun; now I have found a good source.

Posted by Nate Christen at 1:36 PM No comments:

Here's a little experiment, a two-page supplement for use with D&D 5e and the Spelljammer setting. It presents stats for dwarf asteroid miners, stats and deck plans for a bark, and plot hooks for involving them in adventures and campaigns. 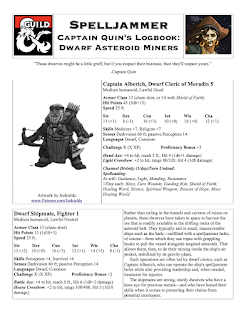 Posted by Nate Christen at 5:07 PM No comments: