The Island of the Minotaurs


For a little while now I've been kicking around an idea for a labyrinth with moving walls. Last week some of the details for that began coming together and I sketched a rough version of it. As I was doing so, however, I also started thinking about the island on which they live, inspired by mythical Crete. This article draws from that inspiration.

The Island of the Minotaurs
Of all the islands on the northeastern end of the Middle Sea, perhaps one is the most distinct, a long and narrow body of land with rocky a coast and forested inland hills. This is the home of the minotaurs, a cunning race of men with humanoid bodies and the heads of bulls. Some say that they are the unfortunate result of a coupling between a human noblewoman and a sacred animal, while others maintain that it was the influence of a demon lord—likely Baphomet or Lamashtu—that led to their rise. Whatever the case, there's no doubting that they are clever and powerful creatures. They have taken over the island, wiping almost all of the other inhabitants. 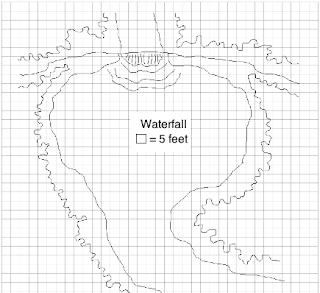 Amalthea
Not all of the natives have been cowed, however. The island's lone protector is a nymph named Amalthea. She dwells in a cave hidden behind a waterfall high in the island's interior. From there she provides what help she can to those unfortunate others who become trapped on the island. Amalthea

Amalthea the Nymph: Refer to page 217 in the Bestiary for details.

Reaching Amalthea's cave is not easy task. It requires a DC 20 Climb check (15 due to the rough rocky surface, +5 because it is slippery with water spray). That assumes, too, that the nymph is not actively opposing the one who approaches her; she can use her stunning glance and blinding beauty abilities to repel most intruders, and has an impressive variety of spells, too.

Inside the cave is a broad central cavern (1) with a natural stone table—a stalagmite with a flat top—where she receives visitors. Branching off from there are two smaller caverns, one (2) that holds an ancient shrine to the Earth Mother, and the other (3) in which Amalthea sleeps. Whatever treasure the nymph possesses can be found there. 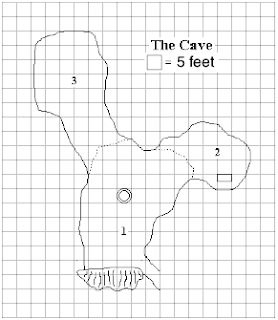 Quasits
Because the minotaurs have dealings with demonkind, they permit a flock of quasits to run amok on the island. These little demons act as messengers and spies, and also delight in tormenting any unfortunates whom they encounter.

Quasits: Refer to page 66 of the Bestiary for details.

The Agreement
What most people on Homeworld don't know is that the minotaurs have a working agreement with an agent of the Northern Empire. Once a year, that agent hires a ship to deliver convicted criminals, unrepentant heretics and similar types—the “dregs of humanity”—from the Empire to the Island of the Minotaurs.

The condemned are left in the bay of a ruined fishing village, in theory left to fend for themselves. Of course, once the quasits learn of new arrivals, they report quickly back to the minotaurs, who then come to hunt the newcomers as a sick kind of sport. 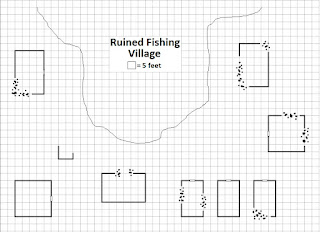 Posted by Nate Christen at 6:36 AM No comments:

A Timeline of Homeworld History

Presented below are some of the more notable events that have taken place on this world.

The Scope of History and Racial Lifespans
When considering the span of history on Homeworld, it's interesting to consider those races that live much longer than humans. For example, in the 844 years that have passed since the establishment of House Helios and the Northern Empire, some thirty generations of humans have been born. Even the oldest humans (not taking magic into consideration) have only experienced some 110 years, or an eighth of that time. In contrast to that, about six generations of elves have been born. What is more, the oldest among them can reach 700 years or more, meaning that their parents were alive when the House of Helios was founded and the first Emperor was crowned. Dwarves and gnomes might need to go a generation further back in order to hear first-person accounts of those events.
The net result of this is a sense of perspective when it comes to how characters of different races view various political, religious and military events. For example, while the Church of Ptah might seem like a growing threat to those humans who worship Sol, it's a development that occurred within the lifespan of some venerable elves.

Timekeeping on Different Worlds
Adding another wrinkle to the matter of timekeeping is the fact that different worlds have different lengths for their days and years. Although this might make little difference while PCs are adventuring on said planets, it comes into play when the PCs need to reference documents written on those worlds. Refer to the chart below for comparisons.

For example, an event that happened some 4804 years ago, by Homeworld Reckoning, would be considered to have occurred 2,555 years in the past according to Tyrian Reckoning. On far-flung Kronos, a whole human generation can pass in one year's time. There is also the question of what date different worlds use as the beginning of their calendars. For example, the Northern Empire on Homeworld uses the date when the House of Helios was established—4 Capricorn 1—as the start of the calendar.

Posted by Nate Christen at 4:42 PM No comments:

Previous articles have presented lists of monsters for use on different planets in the Sol System and beyond; this one details the types of creatures one is likely to find on Homeworld itself, grouped according to the regions that they inhabit.

Note that these lists don't include certain classical types of monsters. Undead, for example, often result from some horrible death or foul experimentation, which can happen almost anywhere. The same can be said for many elemental creatures, which are magically summoned, as well as for golems, clockwork beings and other constructs, which are deliberately crafted. Minotaurs inhabit their own island in the Middle Sea, along with the gorgons that they create. Finally, dragons on Homeworld seem to have gone into some kind of exile, since they are very rarely seen.

Using the Encounter Tables to inspire Adventure and Campaign Plots
Along with determining the types of creatures that the PCs are likely to encounter in a given region, these tables can also provide inspiration for adventure plots and campaign storylines. A few of the possibilities are detailed below.

Posted by Nate Christen at 8:09 AM No comments: