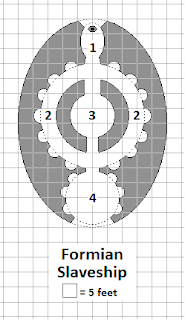 Slaveship
The slaveship is larger, being fifty feet wide and seventy feet long, with three distinct compartments and almost a fourth. The fore compartment (1) is very similar to that of the scoutship, boasting the peforated viewport and the navigation sphere. This is where the formian taskmaster can usually be found. Aft of that is a broad circular tunnel (2), which is cut with niches for the warriors that the vessel normally carries. In the center of the ring is a storage area (3) which houses the slaves that the taskmaster takes from visited worlds. At the stern of the slaveship there is another compartment (4) that can be used for cargo and/or weapons, and that has niches for the workers who assist the warriors and taskmaster.

Posted by Nate Christen at 9:52 AM