This post introduces a new faction for use with the Sixth Gun RPG, a group known as the Sisters of Salem.

Overview
The production of a stage play has its own kind of magic, being a combination of emotional acting, elaborate costumes and scenery, music, and even special visual and auditory effects. What few people know, however, is that some theater troupes push beyond such imaginative magic into the actual practice of the arcane arts, using full-blown sorcery to gain influence over the audience. Such is the case with a group known as the Caliban Company, which is a front for a coven of witches. 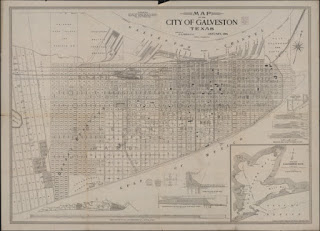 Galveston, Texas
The Company's theater, modeled after the Globe Theatre in London, is located in the bustling city of Galveston, Texas, on the western side of town. 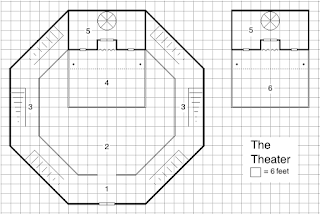 The New World Theater
Refer to the map below for the following location details.


2. Courtyard
This open area has no roof overhead, and the floor is nothing more than packed earth. Visitors may pay a much smaller sum to stand here, and such individuals are known as groundlings.

5. Backstage
During productions, the actors and stage hands who are involved can ready themselves back here, and a show's director is almost always present. The ground level opens directly onto the stage, while the second level features a balcony for certain dramatic scenes. The top level is generally used for storage, including old costumes and props and the like.

6. Under-Stage
In order to make certain special effects work, there are a number of trapdoors that lead down to this area. The spiral stairs from the backstage area also lead down here. 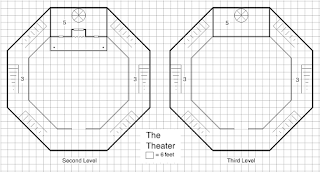 The Sisters of Salem and the Caliban Company
As European explorers and settlers began exploring the North American continent, they opened up myriad opportunities for those who were willing and able to take advantage of them. Indeed, many were able to find their place in a new society, one that was—in theory, at least—less bound by ideas of class, religion, and other cultural biases. Adding to that sense of optimism was the fact that a woman was the supreme sovereign of England—Queen Elizabeth, who commanded artists such as William Shakespeare and Christopher Marlowe; an occultist like John Dee; and exploring sea captains such as Francis Drake, Martin Frobisher and Walter Raleigh. One could be excused for thinking that the horizons of possibility in women's lives were expanding beyond anything previously known.

The truth, however, was something different. Many of the settlements in this New World were founded by people with conservative outlooks, such as the Puritans who made their colony in the Massachusetts Bay area. That led to an unfortunate incident in which a few young women who dared to dabble in the occult arts were charged with witchcraft, arrested, brought to trial, condemned and executed for their supposed crimes. While the men in charge of that colony were eventually criticized for causing more than a dozen executions, they faced no punishment. To those women who were seeking greater freedom and self-realization, the message was clear: the New World was shaping up to be very much like the old one.

In a show of solidarity with their slain compatriots, some of the women founded a secret society that they called the Sisters of Salem. It is dedicated to preserving the study of magic and promoting the discovery of new relics and lore. At first they were forced to keep their activities complete hidden, but before long they devised a means of operating more openly—by founding a traveling theater company. That allowed them to move about with greater freedom, and to conduct some of their studies under the guise of research for various productions. Eventually the established a permanent base of operations, the New World Theater, modeled after Shakespeare's Globe. They named their group the Caliban Company, funding their eldritch investigations with profits from the staging of entertainment.

Members
Profiled here are just a few of the prominent individuals who are part of this organization.

Zerelda Williams, the Scholar
If anyone can be called the leader of the company, it is Zerelda. She is the one who chooses the plays to be presented, researches them and then plans the productions. To that end she is almost always caught up in one text or another, be it eldritch in nature or something mundane. It's said that Zerelda hails from back east, and can trace her lineage to Salem at the end of the 17th Century.
Attributes: Agility d4, Smarts d8, Spirit d6, Strength d6, Vigor d6
Skills: Investigation d6, Knowledge d6, Notice d6, Persuasion d4, Spellcasting d6
Charisma: --, Pace: 6”, Parry: 2, Toughness: 5
Edges: Arcane Background (Sorcery), Ghost Sight, New Power
Hindrances: Bad Eyes (Minor), Small
Special Abilities
Power Points: 10; Powers: Detect/conceal arcana, dispel, grave speak, speak language
Gear: Comfortable clothing, various books, magical trappings and writing materials 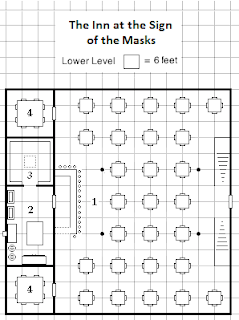 The Inn at the Sign of the Masks
While the New World Theater provides a source of income for the Sisters of Salem, as well as a source of funding for its activities, most of the members reside at a nearby hotel, the Inn at the Sign of the Masks. It takes its name, naturally, from the famous symbol of the theater—two masks, emblematic of comedy and tragedy. Indeed, it can be recognized by a large sign hung out front, bearing those visages along with its name.

The Inn itself is two stories in height. The first floor has a broad main room (1) filled with tables and chairs, and with a bar along the inside wall. Behind the bar a door leads to the kitchen (2), and further back to the pantry (3). There are also two small rooms (4) available for gatherings that require a little more privacy.

Two stairways lead from the main room to the upper floor (5). Most of the rooms there (6) are furnished with a bed, a wardrobe and a small desk. There are also some rooms with two beds (7) for families. 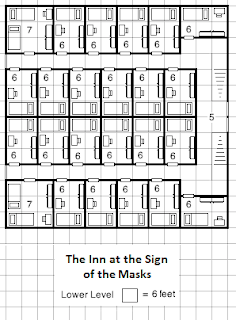 Typical Inn Employees
Only some of the women at the Inn know about its connection to the Sisters of Salem. Those who are aware, in fact, likely came to work here in the hope of being accepted into that organization and, thus, to begin their own occult studies. Others are just ordinary women, some of whom also work for the Caliban Company and hope to gain fame through the theater.
Attributes: Agility d6, Smarts d6, Spirit d6, Strength d6, Vigor d6
Skills: Knowledge (Area) d4, Notice d8, Persuasion d6, Stealth d4, Streetwise d6
Charisma: --, Pace: 6”, Parry: 2, Toughness: 5
Edges: Alertness
Hindrances: Curious
Gear: Comfortable clothing, miscellaneous personal items.


Life at the Theater and the Inn
The Sisters of Salem and the Caliban Company can be used to introduce all manner of plot elements for adventures and campaigns; detailed below are just a few of the possibilities.

Posted by Nate Christen at 3:33 AM