This post is the first in a series that will explore designs for the asteroid-built aetherships of the formians. 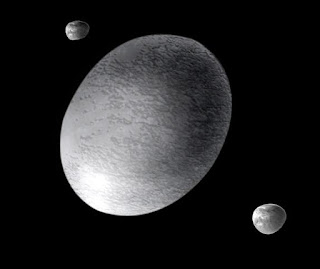 Formian Stoneships
Recently an exploratory crew from the Dwarven Mining Guild made an unexpected discovery—what they thought was an asteroid was, in fact, some kind of aethership. Instead of a wooden hull, it was carved from stone; in place of sails and cordage, there were carved lines filled with some kind of metal; and finally, the orb of control was replaced by a crystal globe set into a truncated pillar in the chamber that seemed to be the vessel's forward section. 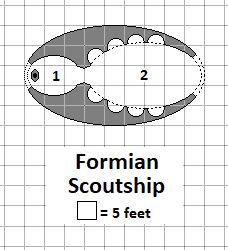 The formian scoutship is a simple ovoid asteroid, forty-five feet long and twenty-five feet wide. The ship's exterior is unremarkable, allowing it to blend in easily with ordinary rocks drifting in the Belt and other such locations. Its interior is divided into two section. The fore compartment (1) is small; its most notable feature is the crystal globe atop its pillar, which serves as the pilot's station. In front of that is the forward viewport, where numerous small holes have been cut through the thin wall of stone. That allows the crew to see out of it, without letting others see inside. The aft compartment (2) has eight niches cut into the walls, providing places for the traveling formians to be sealed in with spider-spun webbing. They surround a broad, open hold for cargo; at the back of it is a section of wall that can swing outward for loading and unloading.

A formian scoutship is normally crewed by twelve workers; refer to page 113 of Bestiary 4 for more information.

Formian Scoutship
Colossal space vehicle
Squares 45 (25 ft. by 45 ft.); Cost NA
DEFENSE
AC 2; Hardness 8
hp 900 (450)
Base Save +0
OFFENSE
Maximum Speed 180 ft. (magical); Acceleration 30 ft. (magical)
CMB +8; CMD 18
Ramming Damage 8d8
DESCRIPTION
This vessel, carved out of an asteroid, has two interior compartments, the “bridge” and a space that combines cargo and passenger quarters. The viewport in the fore is perforated with numerous small holes, and moving sections of wall in the aft allow access and loading.

Crew 2 (not including weapons crews)

Weapons One Large direct-fire siege engine positioned in the stern; it may only fire out the aft end of the vessel.