Spirits of the Void

Here's a band of pirates for use in space fantasy campaigns. 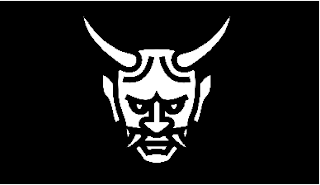 Spirits of the Void
While there are more than a few pirates who ply the vast open spaces of the Void, none is more feared than those known as the Spirits of the Void. They have a reputation for appearing as if out of nowhere, fighting with quarter neither asked nor given, taking what they want, and leaving few if any survivors.

Note: The oni image used in the flag was created by Delapouite.

The Crew
All of the vessel's crew are detailed as follows.

The Ship
Use the deck plan for a junk, which can be found at the following link.

Each of the private cabins (area 2) provides quarters for a pair of ogres. The captain's cabin (area 3) is home, of course, to Lord Kyodaina. Lady Hasu has a private cabin (area 5) to herself. The cargo hold (area 7) is filled with both piles of contraband and hammocks for the ordinary sailors, along with Mr. Osoroshi.

Posted by Nate Christen at 5:37 PM