This post carries the d20 Pirates blog into its tenth year. While the focus of it has changed in the past decade, from D&D-based historical pirate material to space fantasy using the Pathfinder rules, with forays into pirate- and supernatural western-themed Savage Worlds content, I'm pleased that it's been an outlet for my gaming-related ideas. Thank you to everyone who reads it, and best wishes in the coming year. 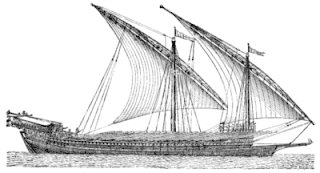 Tale: “Answers and Questions”
Max could see that it was only a matter of time before Martelli and his pirates overran the rest of the Navy men, and so he had to act quickly. First he stuck two fingers in his mouth and gave a shrill whistle, and then scrambled down the side of the roof closer to the storehouse. Dropping to the ground, he rolled back up onto his feet and then ran across to that building's front door. Pressing his back against the wall beside the door, he watched as the soldiers who'd been on guard duty threw it open and went running toward the dock to help their fellows.

Recognizing his opportunity, Max slipped inside.

“Max?” It was Konrad who saw him first. “Ptah be praised, am I happy to see you.”

The halfling silenced the dwarf with a finger to his lips. “Save it. Martelli and his pirates are attacking the compound. We have little time.”

Max stepped over among the prisoners and, unrolling his tool kit, chose a pair of lockpicks. With practiced efficiency he set upon his comrades' shackles. As each crew member was released, he or she took a moment to stand, stretch, and rub circulation back into aching limbs.

While Max freed the last crew member, Horace called to him in something like a stage whisper. “This chest,” and he indicated a wooden one bound with iron, “I think it has our gear in it.”

The halfling jogged over to it and went to work on its lock, too. As he did so, they all heard a distinct three-noted whistle from outside one of the storehouse's shuttered windows.

It was the call of a lark.

“That's Uriel and Nar'raw,” Max announced. “Let them in.”

No sooner had Horace done so than the big half-orc climbed nimbly through the opening. With a nod in the direction from which he'd come, Uriel began helping others back through it, and Nar'raw was there to ease them to the ground. Lucinda, Konrad and Horace emerged after the crew members, having taken a moment to reequip themselves, and were followed by Uriel and Max. Boosted by the half-orc, the halfling did his best to hitch the latch again from the outside.

“We have a boat near here,” Max explained, “but it's not big enough to hold all of us.”

“I think our best bet,” Uriel suggested, “is to make for the interior and wait out Martelli's men. If they don't know we're here, then they won't think to look for us.”

Horace stroked his mustache. “That makes sense. After they've departed, we can send a few people for help.”

Konrad looked from one officer to the next. “Are we in agreement?” The others nodded—but then were interrupted by the crash of the storehouse doors being forced open, followed by the sounds of tramping feet and angry voices.

“That's it, then,” Horace declared. “Start the retreat.”

Max moved to obey, taking the lead and showing the others how to move as quietly behind him.
Lucinda froze, however, and put up a hand. “Wait.”

“What is it?” Horace whispered.

For her part, the half-elf muttered an incantation and then gestured toward the building.

“Lucinda,” the human continued, “what are you doing?”

As if heedless of him, the wizard produced a small bottle from her component pouch, thumbed the cork out of it, and then dipped a feather inside it. Then she muttered another spell.

“What is she--” Horace started to ask, but Konrad shushed him.

Lucinda concentrated a little longer, and then nodded. “Ah. I suspected as much.”

She cast a quick glance at Nar'raw, who was busy attending to other matters. Then Lucinda smiled. “I think I've found the eggs.”

The Larks made their way inland, with Max leading and Uriel bringing up the rear, the half-orc doing his best to sweep away any tracks that they left. They followed a circuitous route into the island's thickly wooded interior, and then waded across a shallow stream to conceal their passage. Eventually they arced back to the island's southern coastline and there stayed hidden behind a hill from atop which Max could watch the pirates in the bay. Peering through the spyglass that he'd taken from the house, he could see them emerge from the compound and start back toward the ships. A moment later, smoke began drifting up into the sky from inside the compound, and before much longer the light of flames became visible.

Martelli's men paused for a moment to observe the fruit of their handiwork, and then started toward the peer. Some of them carried more torches and flammable materials, and went aboard the docked Luminous.

“Damnation,” Max swore, and then ran back down the hill toward his comrades' makeshift camp.

The other Larks were resting and sharing a meal of gathered fruits and the last of Uriel's smoked meat, along with water from the stream, when Max returned.

“Good and bad,” Max explained. “On the one hand, there's a galley ripe for the taking docked in the harbor. On the other, Martelli and his men are setting fire to it.”

“What!?” several voices demanded together.

“Even so,” the halfling continued, “they are setting sail while we speak.”

“So we could save it?” Horace asked.

“Good. You and Uriel, take a few hands and salvage that ship.”

The halfling and half-orc led a small party back along the coastline, careful to stay out of sight of the departing pirates. Reaching the harbor, they rushed aboard the galley, which was only starting to burn. Swinging his sword, Uriel cut away chunks of wood that were aflame, and the crew members—their hands wrapped in wet cloth—tossed them overboard. Before long, all of the flames were extinguished.

“What do we do now, sir?” a crewman asked, turning to the half-orc.

“Cut some greenwood,” Uriel advised, “and throw it on the burning fort. We don't want the pirates to suspect that something is amiss.”

An hour later, the officers of the Skylark were gathered around a makeshift captain's table in the aft section on the lower deck of the Luminous—one assembled from cargo crates, and surrounded by more of the same that were used for chairs—with a map spread out for viewing. At the same time, Max was poring over the letters that he'd taken from the house in the compound.

“Lucinda,” Horace asked, “what was that spell that you cast into the storehouse?”

She smiled. “There were two, actually—one to detect the presence of magical items, and one to identify their natures.”

Horace nodded. “And what did you learn?”

“Arturo Martelli carries on his person an item that has a strong aura of conjuration magic.”

The others waited for more information.

“I believe it is,” Lucinda continued, “a portable hole.”

“To put it simply,” she explained, “it is a piece of what seems to be ordinary black cloth, but it is imbued with magical properties such that there is an extra-dimensional space inside it, which allows its owner to store things inside while it is spread out upon the ground, but then to hide it on one's person when it has been folded up.”

The others just stared at her, before Nar'raw spoke up. “And you think that Martelli has my clan's eggs inside that thing?”

Nar'raw hissed. “But what good is it to know that, if we don't know where the pirates are headed?”

Before anyone else could reply, Max responded. “ I believe I can help with that.”

“What?” a number of voices asked.

The halfling shrugged. “While I was, exploring the house, I found a few letters that can shine some light on this subject.” He produced a bundle of papers from inside his coat and held it up with a smile.

“It says here, “ Max replied, “that this wrecked vessel was last reported as passing the southern tip of the Morean Peninsula, and that it was headed east toward the Sacred Archipelago.”

“I know that area,” Horace added, pointing to locations on the map northwest of Minotaur Island and eastward from there. It's a tangle of islets and rocks that make for treacherous sailing; if this ship sank, then that's a likely place.”

Horace nodded. “Yes, but we must be careful about it.”

The captain smiled. “For now we start rowing; we can figure out the plan along the way.”

Posted by Nate Christen at 7:04 AM