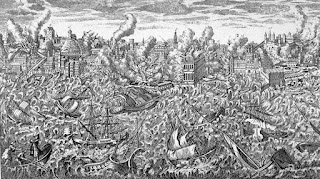 This supplement is designed for use with the 1st Edition of the Pathfinder roleplaying game, using the Aetherial Adventures setting; it sets up a series of scenarios based around the notion that the heroes of the Godharp Saga campaign fail to stop the demons' plot to devastate Homeworld, thereby leaving the planet devastated and overrun.


There's an old saying that no GM's plot ever survives contact with the PCs. Building on that premise, this supplement works on the assumption that the heroes who participated in the events of the Godsharp Saga failed in their efforts to stop Nora the succubus and her demonic allies from laying waste to much of Homeworld.


A “Points of Light” Style of Campaign

The starting premise of this campaign is that Homeworld has been overrun by the demons. As such, it's an awful place in which to live. Even so, there's plenty of opportunity for heroes to find adventure in such a setting. Indeed, it's a world in which isolated bastions of civilization and hope remain in a world that is otherwise filled with villains and monsters. While the situation is undeniably dire, it is also a time in which those who are bold, skillful and lucky can win tremendous glory.


The Powers That Be
At this time, the demons and their allies are the unquestioned conquerors of Homeworld. After all, they control the Godsharp, and all others are at their mercy. Detailed below are suggestions for how other factions from the Aetherial Adventures setting have fared during recent developments.
Places of Interest
The scenarios of the Godsharp Saga provide plenty of locations that can be used for adventures, including the following possibilities.
In the same way, the Gazetteer of Homeworld provides additional options.
Planetary Ecologies Revisited
The encounter tables provided on pages 15-19 in the Gazetteer of the Sol System can be used to provide ideas for populating different locations with monsters. Just match the table with the appropriate region on Homeworld or other planet for ideas of level-appropriate foes that the PCs might encounter there. Those, then, can be used to “stock the dungeon” in some of the places of interest mentioned above.

Note, too, that certain types of creatures not included on the regional tables for Homeworld can also come into play. This is especially true of the undead, which would be drawn to the power of Cyril the necromancer in his stronghold amid the ruins of the Holy City. Additionally, the minotaurs might begin experimenting with building different types of constructs, especially if they can be powered by infernal means.

Plot Hooks
Finally, here are some more suggestions for plot hooks and other story elements from which to build adventures.

Posted by Nate Christen at 2:33 PM