This small, relatively remote island is home to various natural features, along with two different settlements: a trading company fort and a lizard folk village. 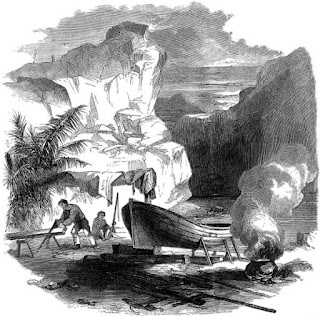 The Island
Claw Island takes its name from its distinctive shape, with a broad natural harbor enclosed by jutting stretches of land. The western half of the island, along with the narrow southern peninsula, is hilly and covered with scrub forest. The eastern half, including the larger “claw” peninsula, gives way to swampland and sandy shoreline. A stream runs from the central highlands in an arc to the northeast and then southwest, finally emptying into the bay. 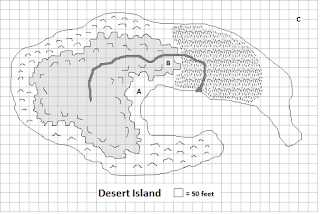 Refer to the map above for the following location descriptions.

A. Trading Fort
Detailed in the previous article, the Royal Interplanetary Company uses this small settlement for buying from and selling to the local lizard folk and those who wish to keep their dealings discreet. The island's broad natural harbor ensures that numerous ships can ride safely at anchor in its confines, ferrying their goods and passengers to the fort's pier.

B. Lizard Folk Village
Also detailed in a previous article, this village sits inside the treeline close to the swampy part of the island. From here the lizard folk hunt, fish, and gather other foodstuffs. They trade with the agents in the fort, obtaining metal goods and other conveniences in exchange for consumables.
Refer to the appropriate article to find the layout of a typical village and information about the folk who inhabit it.

C. Sahuagin Lair
This is marked on the map above more as an approximation than as any truly known location. It is believed to be an underwater lair somewhere in the sea surrounding the island, a place from which sahuagin warbands stage raids against unsuspecting vessels.

Using Claw Island in an Aetherial Adventures Campaign
This landmass can tie into all sorts of adventures, including the following possibilities.

Posted by Nate Christen at 3:26 PM