Lizardfolk of the Great River Delta

In the swamps that fill gaps in the many branches of the Great River, before it spills out into the Middle Sea, there live scattered clans of reptilian humanoids known as lizardfolk. Presented here is the layout for a typical lizardfolk village, along with suggestions for incorporating them into adventures and campaigns set on Homeworld. 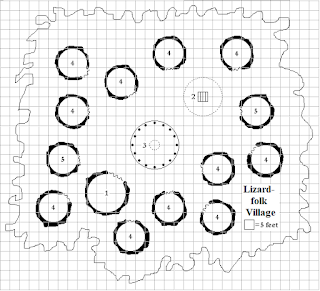 1. Scion's Hut
The largest hut in the village is occupied by the lizard scion who leads the tribe. There are very few furnishings, outside of baskets for holding foodstuffs and various tools. Of far greater value, however, are the tribe's eggs, which are kept here for protection.

Lizard Scion: Refer to page 148 in the Monster Codex for stats.

2. Buried Cage
This circular chamber, twenty feet in diameter and ten feet tall, is where the lizardfolk keep any prisoners that they might take. That can include members of the tribe who have committed some sort of offense against the others, or interlopers, either of whom are awaiting judgment by the scion or the rest of the tribe.

3. Communal Area
Log posts support a roof made from bundles of woven reeds. In the middle the lizardfolk have dug out a firepit, surrounded by stones. All around it there are stools or benches also made from logs. This is where the tribe takes its meals together, sharing in whatever food they've acquired; it is also where they hold council, led by the scion, to make important decisions about tribal business.

4. Other Huts
Each of these domiciles is made from bundled reeds attached to a wooden frame. Some are home to a mated pair of lizardfolk and their offspring, while others are occupied by unmarried males or females. In general there are few furnishings outside of containers for storing foodstuffs, tools and other items.

Lizardfolk: Refer to page 195 in the Bestiary for stats.


Using the Lizardfolk in an Aetherial Adventures Campaign
This location can tie into all sorts of adventures, including the following possibilities.