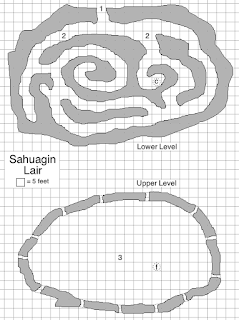 In an isolated area of relatively shallow saltwater one can find this excavated mound. It is home to a team of sahuagin scouts, ones who are always on the lookout for lost travelers, foundering vessels and other easy prey. To that end, they use this lair as a launching point for raids against their enemies, and eventually move their ill-gotten gains back to the tribe's stronghold.
Refer to the map above for the following location descriptions.

1. Entrance
In the front of this hollowed-out mass of rock and dirt there is a single passageway that grants entrance. It is concealed by a mass of weeds, requiring a DC 20 Perception check to notice.

2. Tunnels
Beyond concealment, the next line of defense for the lair is this network of winding tunnels. They are intended to slow any attackers, forcing them to waste precious air while exploring. For that reason most of them loop around until ending abruptly or reconnecting with other paths; only one ends in a hole that passes up to the next level. As a general rule, the tunnels are as tall as they are wide.

3. Main Chamber
This broad, open hollow has narrow slots dug into its side walls, allowing the sahuagin to look out but not letting others see inside. (In game terms, treat them like arrow slits.) The floor is littered with bones from past meals, and concealed among them are the valuables that the patrol possesses. Note, too, that they keep a sizable supply of heavy crossbows and bolts at the ready, to help repel an attacking force.

Sahuagin: Refer to page 239 in the Bestiary for stats.

Sahuagin Scout: Refer to page 190 in the Monster Codex for stats.

At the GM's discretion, more powerful sahuagin characters could also be present; refer to pages 186-197 in the Monster Codex to find additional options for, and information about, these foes.


Using the Sahuagin Lair in an Aetherial Adventures Campaign
This underwater dwelling and its wicked inhabitants can tie into all sorts of adventures, including the following possibilities.

Posted by Nate Christen at 3:36 PM