A Storm of Sails Review 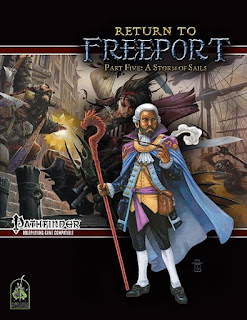 This scenario, Part 5 of the Return to Freeport campaign, was released back in February, but I've taken my time getting to it because I'm still waiting to see the sixth and final adventure in the series be published. I read it, though, and enjoyed it; here's the breakdown.

On a positive note, this scenario includes a lot of ship-to-ship combat—something that has not been all that common in a campaign setting based around pirates. Indeed, there are two different engagements between the fleet that the PCs assembled in The Freebooter's City and the attacking Mazin armada. The rules involved are a simpler version than those presented in Ultimate Combat, and even the ones in the Player's Guide for the Skull & Shackles adventure path, and it seems like they'll work well for fast fleet action. My only concern is that they might seem a little too simplified, perhaps causing players who like crunchier mechanics to be frustrated. Should that be the case, though, then the GM can always fall back on more complicated rules.

My only real frustration is that this adventure, like previous ones in the series, uses stat blocks from books such as the NPC Codex, requiring access to that text rather than repeating the stats in the module itself. It's a small complaint, I know. Now it just remains for the last adventure to be published, taking the action back to Freeport so the PCs can confront the traitor who's been working to undermine their heroic efforts; let's hope that it's been worth the wait.

Posted by Nate Christen at 2:02 PM