One of the great regular articles from the old Dragon magazine was its "The Ecology of the..." series. This took creatures from Monster Manual I and II and the Fiend Folio and explained their origins, habitats and activities in much greater detail, providing ways to incorporate them in a campaign setting. Inspired by this, presented here is a similar take on the merfolk known as onijegi. 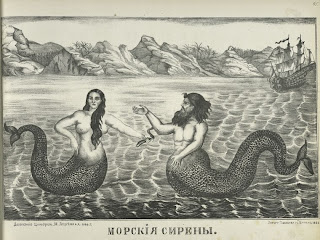 The Ecology of the Onijegi
This article expands on the description of these creatures presented in the Skull & Bones rulebook.

Origin Story
The first appearance of the onijegi is explained in a traditional Yoruba tale. According to it, a young woman once pledged to marry the most handsome man in the world. Just such a fellow she met one day in the marketplace. He explained, however, that he actually came from the river Idunmaibo; he was fish, but had been granted the power to take on human form. Nevertheless, the young woman insisted that they be married, and he assented. They agreed to meet occasionally at Idunmaibo whenever she sang a song to summon him, where she would bring him foodstuffs and he would bring her gifts from the sea.

They continued in this way for some time, until it was that the woman's family insisted on her taking a husband. After all, they did not know of her marriage to the fish-man. When she explained that she was already married, they were outraged. One of her brothers followed her to the river during her usual meeting with her husband. In this way he learned the magic song and, returning without her, used it to summon the fish-man. The brother then stabbed him to death. Some time later she attempted to call him as usual, but he did not reply, and she recognized what had happened. In her passionate grief she threw herself into the river, but instead of dying she was turned into the very first onijegi.

One can find this story at http://www.humanity.org/voices/folklore/beautiful-girl-and-fish

Onijegi in the New World
At some point, of course, the onijegi travelled from Africa to the Caribbean. Perhaps some of them followed the slave ships that made this run with their living cargo; after all, it is commonly believed that onijegi sometimes fall in love with humans, and if one such were then captured and taken as a slave, the merfolk lover might follow the ship and captive to their destination. Some might argue that the length of such a journey is impossibly daunting, but one cannot argue against the fact that the onijegi are to be found in the New World. 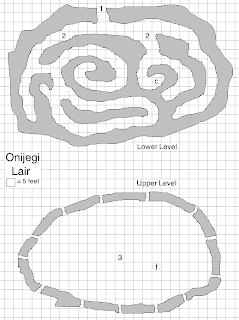 The most common dwelling place for onijegi is one with plenty of reefs, where they can find shelter from storms and possible enemies. Some prefer small, individual domiciles, while others band together and occupy sprawling complexes of tunnels and caverns. Whatever the case, these are generally in shallow water. Refer to the appropriate map for an example of one such structure.

1. Entry
The entrance to the tunnels and chamber in this coral reef lies at the bottom of the sea. More trusting onijegi leave it open to any potential visitors, while those who value their privacy cultivate a bed of kelp in front of it so as to provide concealment from prying eyes. Additionally, those who have access to such things sometimes afix a barred gate in this narrow passage so as to keep unwanted guests from entering.

2. Passageways
The second line of defense for the lair is the maze of twisting passageways--all filled with water, of course--that eventually lead to the main chamber. While the onijegi know the correct path, and can don't need to worry about the lack of oxygen, it serves to disorient and delay intruders. What is more, the onijegi sometimes arrange for unpleasant surprises to be found here, such as sharks, squids or aggressive crabs.

3. Common Area
The onijegi are a highly communal, open kind of people--at least among themselves. To that end, the common area of the lair is not divided into private quarters or similar chambers, but instead is one large space. Small vents provide an inflow of new water, along with sunlight during the daytime. In the lairs of those onijegi who are open to contact with outsiders, this area sometimes has a pocket of air close to the ceiling that allows them to breathe while visiting. It is here that they spend much of their downtime, sharing meals along with stories and other entertainments.

Onijegi dwellings are usually located close to reliable sources of food, usually large beds of kelp. The merfolk supplement this with some meat taken from hunting. Note that they only hunt singly so as to give their prey a fighting chance, out of respect to these sea creatures. Onijegi use coral or stone for making their knives and spearpoints, and weave nets out of seaweed. Coral is also a source of personal decoration for them, as are the pearls that they sometimes harvest.

Indeed, it is the desire for shiny baubles, along with the merfolk's love of storytelling, that sometimes brings them into contact with land dwellers. Given their love of tales, occasional eavesdropping on sailors and others who live by the sea provides them with a wealth of new material. In the same way, onijegi sometimes trade goods from the sea, such as pearls or recovered treasure, for items such as mirrors, steel weapons and other manufactured goods. As mentioned above, this contact also can lead to merfolk becoming infatuated with land dwellers, leading to a relationship that usually brings conflict of some kind.

Connections to Other Aquatic Humanoids
Given their resemblance to other creatures who dwell in the sea, those who know about the existence of the onijegi sometimes speculate that they could all be related to one another. While it is not known how these distinct groups have come to be, it is clear that there are important differences between them.

The sea monks, most people believe, are onijegi who were inspired by the teachings of early Christian missionaries and have now established a monastic order dedicated to them. Ostensibly this should create a conflict, given that the sea monks are generally a pacifistic punch. The fact that they have adopted Christianity, however--as opposed to the traditional onijegi belief in such half-fish divine beings as the West African Mami Wata--is sure to bring some kind of strife as both sides try to win the hearts and minds of the faithful.

Whereas sea monks are lawful, and onijegi are chaotic but good in their outlook on life, the sirens are a cold and uncaring bunch. Their aptitude for leading sailors to their doom shows a calous disregard for other living things, something that pits them against onijegi. It is known that they've practiced such deeds for many centuries, given that they were reported in the time of Odysseus and the Trojan War, but it is not known why they have such a dispassionate outlook.

Throughout the world there are many variations on the story of the onijegi, sometimes in the oceans and sometimes in the rivers. These include the merrow of Scotland and Ireland, the Japanese ningyo, the German Rhine maidens, and many others. Additionally, the resemblance of such legendary figures as the Babylonian Oannes as well as Fu Xi and Nuwa of China--all of whom are reputed to have brought wisdom and civilization to their respective lands--hint that the merfolk could have an even older and more influential culture.

Some mariners consider merfolk to be wicked creatures of ill omen. This is likely because, although most onijegi are kind, there are exceptions. It is those evil individuals whose misdeeds lead to such superstitious beliefs.

The onijegi hunters are individuals to be respected, both for their prowess in combat and for their sense of honor. They only hunt animals singly, to give them a fighting chance; the exception to this is grave threats to the community, such as if a dreaded timingila began prowling in their territory. All of them are proficient with the trident and net. More experienced sergeants also learn to fight with a pair of daggers, allowing them to strike a foe numerous times. Finally, the lieutenants--who often are leaders of their communities--master the ability to leap from the water and attack foes on land or in boats.

The storytellers among the onijegi are perhaps the most adventurous of them all. Given their penchant for learning new stories, they are the most likely to travel close to human and other settlements. It is these who occasionally meet and fall in love with non-onijegi, something that always brings drama of some kind to both parties.

New Relic: Song of Onijegi Summoning
This song, which is a closely guarded secret among the onijegi and the rare outsiders whom they entrust to learn it, can be used to call the nearest of these merfolk to the one who sings it. It can only be used once per month, and doesn't necessarily give the singer any influence or control over the onijegi who responds to it. The song is usually passed along by teaching it orally; a written copy of it would be rare and valuable indeed.

Using the Onijegi in a Skull & Bones Campaign
The onijegi can connect to all kinds of adventure in the Caribbean or elsewhere; detailed here are just a few of the possibilities.

Posted by Nate Christen at 7:13 AM