This is an adventure that I wrote and ran for a gaming weekend with some old college friends; it starts a new storyline following the events of my "Manifested Destinies" campaign. 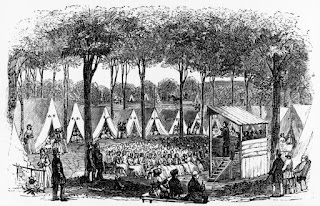 Introduction
The American frontier is home to a diverse group of people, including myriad ethnic backgrounds, professions, political philosophies and religious beliefs. The ideal is that they all can live together in harmony; sadly, reality is often much different. This is one such instance, when a wicked person attempts to exploit the beliefs of some and oppress those of others—but hopefully a traveling troupe of entertainers can foil that foul plot.


Adventure Synopsis
This adventure begins when the PCs—a troupe of entertainers traveling by riverboat—arrive in the frontier town known as The Crossing. On the surface this place might seem like a devoutly religious little community, but appearances can be deceiving. They experience a series of strange encounters, including the arrest of a Native American visitor, tales of terrible nightmares, a woebegone preacher and an unexplained death, and hopefully can piece together the clues to reveal the culprit.


For the Gun Master
The truth of the matter is that a powerful bokor, who is masquerading as a revivalist Christian preacher, has set up shop in The Crossing, and is using his powers (night terrors) to afflict people's dreams, making them believe that they're condemned to suffer eternal torment unless they can find redemption by submitting to his teachings.


Involving the Heroes
This scenario drops the PCs right into the middle of the action, as a group of travelers disembarking from a steamboat at The Crossing. Since it is assumed that they've been together aboard the steamboat for some time, the players should introduce their characters and provide any description and background information that they deem appropriate.


Scene 1—Arrival
The steamboat is docked alongside the long pier that extends from the shoreline into the river; the PCs are just making their way onto land when they are caught up in the growing conflict. Refer to the supplement “The Crossing Revisited” for a layout of the town.


This scene takes place at Location A on the map of the Landing. In addition to the PCs and the others who are crowded around the pier, Sheriff Gerald Lawrence and two deputies are closing in on a native brave, Red Hawk, who is running for the river. It is Lawrence who cried out, and he points toward the fleeing warrior. With that, it's time to enter initiative order.

For their part, Lawrence and the deputies draw their pistols and open fire on the fleeing Red Hawk, while he heads for the protection of the water. Hopefully the PCs decide to intervene. While the sheriff is not to worried about shooting “an injun,” he can be prevented from doing so if someone raises a concern about the issue. In game terms, that could be accomplished through a Persuasion check by one of the PCs, which causes the bystanders to start questioning and grumbling. As long as they prevent the lawmen from killing Red Hawk, the PCs can learn the brave's story, including the following details.

Development
The PCs should be able to de-escalate this situation through quick thinking and fast action. Even so, Sheriff Lawrence insists that Red Hawk be arrested and taken into custody. As that happens, the brave shouts, “There is something not right in this town!” before he is hauled away.


Scene 2—Around Town
In the aftermath of this incident, the PCs can do some exploring and find a place to stay. In doing so, they can learn the following information by visiting different locations.

The Jail
If they didn't learn any of the details of Red Hawk's story, the PCs could visit him at the sheriff's office (location I) to hear more of the story. Of course, that brings more interaction with the sheriff, which could complicate matters for the PCs.

Red Hawk
This native warrior is out of his element at The Landing, but worry about his friend, Running Wolf, has driven him to come here. He suspects that there is something wrong about the town, but he does not know just what it is.
Attributes: Agility d8, Smarts d4, Spirit d6, Strength d6, Vigor d6
Skills: Fighting d6, Notice d6, Riding d6, Shooting d6, Stealth d6, Survival d6, Tracking d6
Charisma: --, Pace: 6”, Parry: 4, Toughness: 5
Edges: Alertness, No Mercy
Hindrances: Outsider
Gear: Bow (Range 12/24/48, Damage 2d6, RoF 1), knife (Damage d6+d4).

The Saloon
In the saloon (area D) there are two people who can shed some light on the situation. One is Elizabeth Gray, the saloon keeper, who can tell about the rapid rise to power of both Reverend Bouchard and his deacon, Sheriff Lawrence, along with the discomforting dream that she had (but only if asked about it specifically).

The other person present is Reverend Malachi Smith, the man who has had his position and congregation usurped by the newcomer. The latter even mentions that “There's a strange fear of sin, judgment and damnation that hangs over the people of this town.” Only if the PCs ask specifically does Gray mention a nightmare that she had recently; this is detailed in the Appendix, below. Similarly, other locals can tell about their own bad dreams, if the PCs think to ask the right questions.

The Church
A visit to the church (location E) lets the PCs meet Running Wolf and Reverend Bouchard. Both are present during the day, while only the prior stays here at night.

Bouchard plays the part of the pious preacher, acting as if he loves everyone and wants to help them lead better lives. If questioned too deeply or otherwise threatened, however, he becomes brusque and insists that “The sheriff should be a part of this interrogation.” Running Wolf comes to his defense if needed, and Bouchard attempts to flee the scene if the PCs resort to violence.

Running Wolf
During his vision quest, this brave saw something that convinced him he needed to follow the path of the white man (as detailed in the Appendix, below). For that reason he has come to The Landing and seeks to learn what he can, even if this place and the people's way of life feel strange and uncomfortable to him.
Attributes: Agility d8, Smarts d4, Spirit d6, Strength d6, Vigor d6
Skills: Fighting d6, Notice d6, Riding d6, Shooting d6, Stealth d6, Survival d6, Tracking d6
Charisma: --, Pace: 6”, Parry: 4, Toughness: 5
Edges: Alertness, No Mercy
Hindrances: Outsider
Gear: Bow (Range 12/24/48, Damage 2d6, RoF 1), knife (Damage d6+d4). 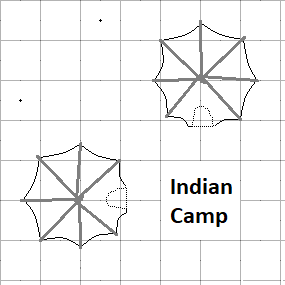 The Camp
Finally, heading out to Red Hawk's camp lets the PCs meet Grey Buffalo, the medicine man. He can explain that he accompanied Red Hawk to this location after the warrior was concerned about his friend. He can be a valuable ally for the PCs if are overpowered by the forces in town, or if they need to go on a Spirit Walk to learn more about the situation.


Scene 3—At Night
Perhaps the best opportunity for the PCs to do some snooping comes in the night, when most of the townsfolk are asleep and there is the cover of darkness. Some of the places they might want to investigate include the following locations.

The Graveyard
If the PCs have learned of Gareth Hildebrand's unfortunate death—he died, apparently from fright, in the middle of the night—then they might want to visit his grave (in the small cemetery next to the church, Area E). Those with access to powers such as Grave Speak or Divination can speak with the dead man's spirit, and therefore learn of his dream.

The House
The most important evidence can be found, of course, in the house (Location G) where Reverend Bouchard is staying. While most of that establishment is quite normal, it has a hidden basement; it takes a Notice check to locate the secret staircase that leads down to it. On one of the two long tables in the basement there are numerous seemingly innocuous items—belongings taken by Gerald Lawrence from unsuspecting victims, which allow Bouchard to use his Night Terrors power against them. These include a handkerchief embroidered with the initials of Godfrey Werner; a lock of hair tied with a string taken from Elizabeth Grey; and a small wooden box that holds a U.S. Marshal's badge that formerly belonged to Gareth Hildebrand. The second table holds a metal lockbox, which is filled with $1000 in bills, coins, and other items of value donated by the pious townsfolk to the false preacher.

While discovering these items can provide the PCs with a vital clue, being caught in the house is a considerable problem. Reverend Bouchard immediately sounds the alarm, and Sheriff Lawrence—who also stays at the house—starts shooting and calls for his deputies. What is more, the fact that so many people in town revere the new preacher means that they try to help the lawmen subdue and capture people who they believe to be meddling interlopers. Such a sprawling altercation leads into the final scene, below.


Scene 4—All In
Revealing Bouchard's deception and talking down the angry townsfolk requires a Persuasion check. Having the items from the basement provides a +2 bonus to that check, and at the GM's discretion good roleplaying could grant a similar benefit. On the other hand, if the PCs have done anything to make the locals distrust them, or if they handle the diplomacy in a bad way, then the GM could apply a -2 or even -4 penalty to the check. Until they succeed, the lawmen and the preacher continue their attacks, using more force than is necessary in order to silence those who can expose the plot.

Once the PCs do convince the crowd, however, the locals cease their interference. What is more, success with a raise means that some of them are even willing to help the PCs. This should still make for a challenging fight, but one that becomes much more manageable without the entire town rising up against the heroes. What is more, the deputies can be dissuaded from fighting if the PCs defeat the sheriff and then make a successful Intimidate check.

Finally, if they are being overwhelmed, then Bouchard and Lawrence could make a run for the livery (Area J in town) and try to steal a couple of horses with which to attempt a getaway.


Epilogue
In the end, the PCs can shake up the balance of power in The Crossing, possibly creating an opening for someone else to take charge. The locals are grateful for them exposing the truth, and at the GM's discretion, they might provide goods or services as a sign of their gratitude. The PCs are welcome to stay as long as they will in town, and perhaps even to provide a new candidate for sheriff, or until another adventure comes their way.

Further Adventures
Detailed below are just a few of the possibilities for additional business in which the PCs can become entangled.


Appendix—The Stuff of Nightmares
Detailed below are the dreams with which various locals have recently been afflicted.