Here's an update of the town formerly known as Smith's Crossing, one that makes changes based on the events of the "Manifested Destinies" campaign and adds the development of a railroad.

Introduction
The little town now known as “The Crossing” has gone through many changes in its relatively short history. Over the past year it saw a corrupt doctor and his wife—who was a practitioner of Voodoo—try to take control of the populace by creating poppets that depicted notable locals. That plot, along with the release of a virulent plague, was discovered by a band of adventurers, who tracked the responsible parties out to nearby Fort Arneson, where Mrs. Smith tried to summon a crossroads demon and open a path into the Winding Way. That effort, too, was foiled by the adventurers, but not without having to settle a battle between the native people and the soldiers of the U.S. Army. Indeed, that was only the start of things, because members of the Knights of Solomon then tried to access the Winding Way in order to find and unleash a trapped but powerful spirit, Marinette of the Dry Arms, but once again were foiled by the aforementioned heroes.

In the aftermath of these developments, those who survived them formed a town council that would govern the settlement. They consisted of Mama Celeste, an original founder of the settlement; Godfrey Werner, who operates the warehouse and general store; Elizabeth Grey, keeper of the saloon; and Reverend Malachi Smith, the minister. Their first legal decision was to change the name of the settlement to The Crossing, followed by another that authorized the hiring of a sheriff in order to keep the peace. At the same time, western expansion throughout the United States brought the construction of a railroad to the area, something that has created all kinds of complications in its own right.


A number of entrepreneurs have built houses in which they can house visitors to the settlement, especially the higher-ups in the railroad construction business. Each of these buildings has a wide-open entryway inside the front entrance (1), with stairs to the upper level as well as doors leading to the parlor (2) and dining room (3). A door from the latter leads into the kitchen (4), which itself connects to the pantry (5), the house's backyard, and the cook's quarters (6). On the upper floor there are rooms for guests (7) along with master bedrooms for those who run these lodgings (8). 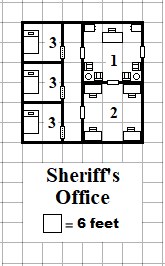 I. Sheriff's Office
This building boasts a reinforced front door, although the walls are still made of wood. Inside is a receiving area (1) with tables and chairs. Beyond that there is an office for the deputies (2) with desks. Each of three cells (3) has a cage-style door and a bed. 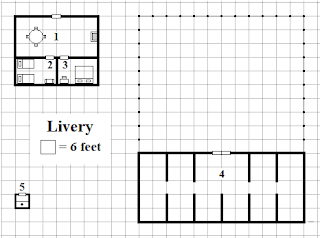 J. Livery
This establishment offers horses for rent. The house has a common room (1) and two bedrooms (2 and 3). The stable itself has ten stalls (4) and there is an outhouse in the back (5). It is run by the widow Nora Clayton and her two children. 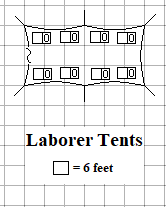 K. Laborers' Tents
Each of these canvas enclosures is nearly twenty feet wide and almost forty feet long; they have cots for eight workers. 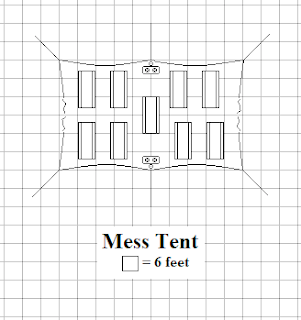 L. Mess Tent
This huge tent, some forty by sixty feet, has two big cast iron stoves in the middle of each wall, and nine long tables for feeding hungry workers.

M. Supply Tent
While it has the same dimensions as the mess tent, this shelter is filled with crates, barrels and sacks instead of tables. This is where all of the foodstuffs, tools, materials and other supplies are stored, and so two guards are stationed here at all times.

N. Railroad Tracks
These mark the progress that the construction crew has made so far. What is more, once they are longer, the railroad company will put a train on the tracks, to provide quarters for the overseers and owner, when he visits, as well as to move deliveries of supplies further on down the line.

O. Second Pier
In addition to the pier at the Landing, the railroad company has added this one in order to receive their own deliveries.

Posted by Nate Christen at 5:51 AM