This post presents the ghost of Small Raven and how he has taken to living in the Winding Way. 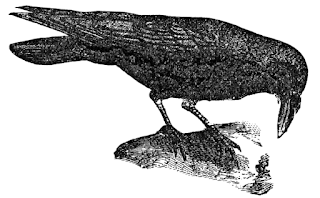 Background
It's no secret that life is hard on the western frontier in the United States of America, but it can also be a place of almost unlimited opportunity. Few know this better than a Native American boy named Small Raven. After seeing many of his fellows give up their traditional lifestyle—along with important artifacts—while signing a treaty at Fort Arneson, he decided to steal back the items and flee the area. Unfortunately, he was wounded during the attempt and ended up in Smith's Crossing, a settlement under the sway of powerful occultists, Dr. and Mrs. Smith. The bad doctor murdered the boy and cut off his right hand, knowing that he could use it to create a Hand of Glory. The rest of Small Raven's body was buried in the cemetery by the local church and, as a result, his spirit was unable to find the eternal rest of the afterlife.

That wasn't the end of Small Raven's story, however. Possessing a normal raven, the boy began to search for his missing hand. That brought him into contact with a band of adventurers, ones who led him down beneath Fort Arneson and into that realm between different places, times and possibilities, the Winding Way. Realizing that he could acquire knowledge and influence beyond any past imagining, Small Raven decided to establish himself in that location, gathering a flock of other birds around himself who could act as guides and protectors for other travelers. 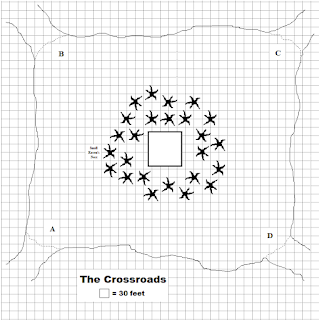 The Tree and Nest
Small Raven's nest is located in a tree that forms part of a grove surrounding a strange old manor house inside the Winding Way. That house stands in the middle of a steeply walled canyon, one that is surrounded by sheer rock walls and has four tunnels leading out of it. Those tunnels lead to the passages under Fort Arneson (A), the cistern beneath a stronghold of the Knights of Solomon (B), a wardrobe in the underground level of the New Globe Theater in London (C), and an area that has not yet been explored. 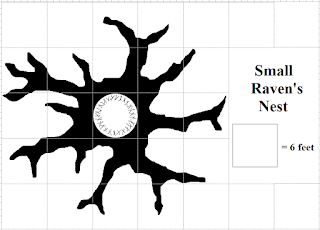 The nest is made from sticks, bits of string, and other materials. It sits amid the outstretched limbs of the tree, which hold it almost like a skeletal hand. Said tree is devoid of leaves, but is decorated by various baubles hanging from its branches; these are shiny trinkets collected by Small Raven and his flock. Those, combined with the numerous black birds that sit on its branches, make for an impressive sight.

Small Raven and his fellow birds can act as guides for those who travel the Winding Way, as long as they provide suitable gifts. They are most fond of shiny baubles, with which they decorate their nest and the rest of the tree, or relatively fresh meat for them to eat. In the latter case, the birds save the eyes of any given creature for their leader to devour. As long as they are satisfied with a visitor's offerings, the birds share what they know and even lead parties through the hazards of this strange and otherworldly realm.

Small Raven
Use the stats for a Haint, from pages 75-6 of the Sixth Gun RPG, but add the following abilities: Arcane Background (Shamanism), with powers deflect, dispel and speak language, and 15 Power Points.

The Flock—When pressed, the birds can attack as a swarm (refer to page 189 of the Savage Worlds Adventure Editionbook for stats).

Plot Hooks
Here are just a few ways in which Small Raven and his flock can be used in adventures and campaigns.

Posted by Nate Christen at 3:48 PM