As the first post of those presenting material that I used at Con of the North, here are character sheets for the crew of the Skylark, raised up to 5th level. 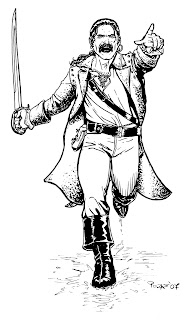 Horace is the captain of the bark Skylark. While he and his fellow adventurers discuss and vote about all business matters, such as which cargoes or passengers to take, or what course to set, but during battle he gives the orders. This human loves nothing more than the freedom of commanding a vessel under sail—except, of course, the chance to cavort at a tavern in port and, most importantly, his trademark mustache.

Horace hails from Alcudi, a small fishing village on the northern coast of the Middle Sea. The sailor learned to handle a ship while serving aboard fishing vessels, but always dreamed of greater glory. He found the opportunity to pursue it when he and his comrades discovered the wreck of an aethership, which they used to to refit their bark the Skylark. While for the most part they make their living through traditional charters and cargo runs, they are always open to more adventurous opportunities. 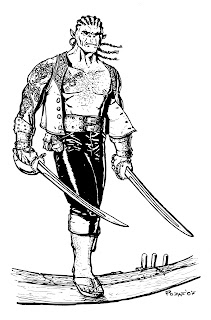 Uriel was born and raised among the clans of the Barbarian Lands to the east of the Middle Sea. Indeed, he even trained to serve as a scout for some of the mercenary bands there, but found that he could not stomach working for blood money. That was why he left home, wandering westward until he reached the territory of the Northern Empire. There he faced tremendous intolerance because of his ancestry, but found that he was more readily accepted among sailors and their ilk. Indeed, that was how he met up with the other crew members of the Skylark, with whom he is now fast friends—and especially with Maximilian. The half-orc now leads shore parties and boarding actions, when needed. 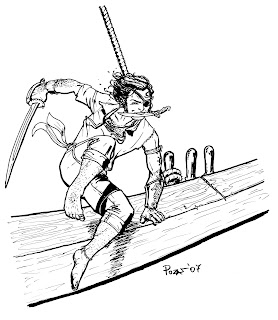 Max was born in the City of the Sun, at the heart of the Northern Empire. He never had much use for religion, however, nor any affinity for “drudge work.” What is more, he saw hypocrisy in many of the high and mighty from that city, and thus took to a life in the shadier parts of town. In general he tried to do good for the people around him, but the powers that be didn't necessarily see it that way. Before trouble could catch up to him, he signed up with a ship's crew—and that's how he met his companions aboard the Skylark.

The halfling serves as lookout aboard the ship, and thus can often be found perched in the crow's nest, but also throws himself into fights when necessary. He also acts as quartermaster when needed. Max is fast friends with Uriel, and sometimes assists Lucinda with navigational work. He knows that Konrad doesn't always approve of his methods, but he has also come to learn that he can count on the dwarf cleric in a pinch—and afterward, if that pinch involved throwing, and taking, punches. 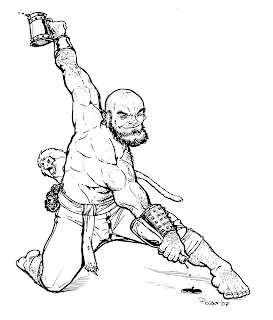 Konrad, son of Kazmir, grew up serving in the temple of Ptah in the Holy City on the southern coast of the Middle Sea. There his life was steeped in religious tradition and ritual, and he developed a zeal for learning. Part of education, however, is exploration, and that's why he chose to leave the insular life of the temple behind. When a bark with an adventurous crew, the Skylark, happened to be passing through port, he asked to join them and was accepted.

The dwarf serves, not surprisingly, as the ship's healer—but can also hold his own when it comes to a fight. He finds Lucinda to be a font of knowledge and, due to their varied backgrounds and exploits, respects the other officers, too. Although they tend to be less disciplined than he would prefer, at least when they are ashore, Konrad appreciates their sense of wanderlust. 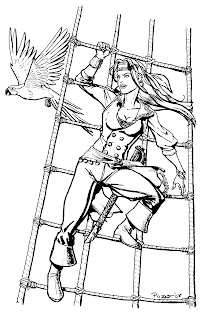 Lucinda was born and raised in the vast tract of sylvan forest known as Arcadia. Her father was a human wizard, and her mother an elf druid. She inherited his interest in arcane magic, leaving home at a young age to seek a tutor so that she could study evocation in particular—something of which her parents disapproved. It was while traveling that she met the crew of the Skylark; although they didn't seem like fitting company for her at first, she won their respect through her spellcasting ability, and they earned her friendship because of their open-mindedness and willingness to visit new (and sometimes dangerous) places.

The half-elf serves as the navigator aboard the bark. She enjoys conversation with Max and Konrad the most, and tolerates Horace's good-natured flirtation. Uriel seems somewhat unsure what to make of her, but respects her abilities. 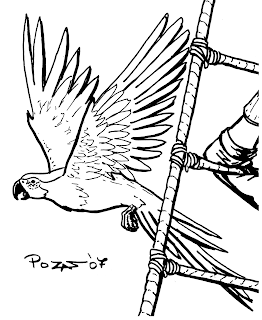 The mascot of the 'Larks is Lucinda's familiar, a parrot named Polly. She uses the bird for spying on foes, delivering messages to allies, and even in combat when needed. During quiet moments Polly usually finds a place in the rigging to rest, or a perch in the captain's cabin if there are treats available.

Posted by Nate Christen at 6:43 AM