Here's a write-up for the Black Stars, a secret occult branch of the United States Marshal Service that's introduced in the comic series Shadow Roads. 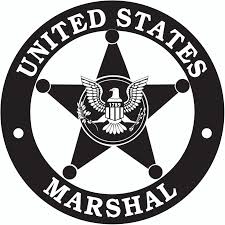 Introduction
While most of the people who live in the American West know about the United States Marshals, not so many are familiar with a special branch of that organization, known as the “Black Stars,” that specializes in the investigation of supernatural activities. It is that agency, then, that this supplement explores.

History
It is commonly known that the US Marshal Service was created by an executive order of President George Washington, singed on 24 September 1789; its purpose was to support the federal court system, arresting suspects, escorting them to trial, and helping maintain order in that broad western territory that lacked any other form of organization. Even so, the powers that be quickly realized that certain happenings required special attention, ones that seemed to have been influenced by supernatural power. With that in mind, the Service appointed a special branch—unknown to most of its other members, and referred to as the Black Stars—to investigate such matters. Their business has included some of the following events. 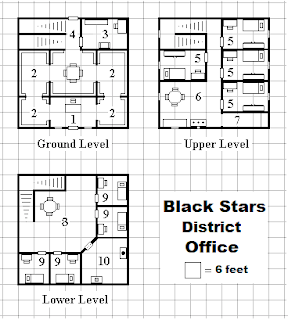 A Black Stars District Office
Members of this special branch of the U.S. Marshals Service use a number of different facilities in which to conduct their business, and so the building depicted in the map above as well as the following area descriptions should only be used as one example. Each of these offices is located in the center of a particular district, including at least one for each state of the Union, as well as for special jurisdictions such as the District of Columbia. Note that territories not yet granted statehood must make due with small frontier offices, as detailed below.

A typical District Office is a two-story structure with windows only on the upper story and, as shall be discovered, an underground level. Inside the stout front door is a reception desk (1). That room is flanked by others lined with bookshelves (2), where the Marshals keep their records, and directly behind it is a small study with a desk and chairs. In the rear of the building is the Deputy Marshal's private office (3) along with the staircases that connect the three floors.

On the upper story are private rooms for the Deputy Marshal and any special investigators that the Service employs (5), each furnished with a bed, wardrobe, desk and chair. There's also a small but functional kitchen (6) and pantry (7).

The basement is where prisoners are kept. There's a waiting area (8) where guards stand duty and prisoners can be interrogated. Four cells with barred doors (9) line the walls, and there's a privy in which prisoners can take care of their personal needs (10). 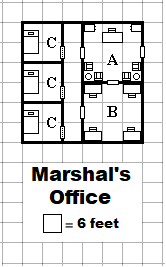 The Frontier Marshal's Office
Refer to the map above for the following location descriptions. Most Marshal's offices are relatively small structures, a single story in height. This particular one is thirty feet on a side and built from wood. The building's front room (A) is fifteen feet square, with a desk for the Marshal himself and a couple of filing cabinets. There are also comfortable chairs for those who are waiting to discuss legal matters. From there, one door leads into the deputies' office (B), with a desk and chair for each person who serves in that role. Finally, a hallway behind both those rooms provides access to three cells (C), each furnished with a small cot and a stout, barred door suitable for holding prisoners. 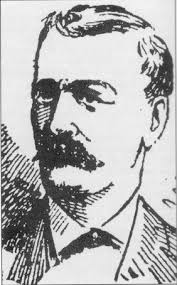 Andrew Llewellyn, Chief Deputy US Marshal for Special Investigations (Legendary)
The head of the Back Stars has seen a lot of things in his time, and has proved himself in battle against forces of which most people are unaware. While he himself cannot utilize any of the magical power that he has witnessed, he is familiar with the eldritch traditions of Europe, Africa and America. What is more, he has command over the other members of his organization, and as such is a formidable foe for those who might use magical powers for evil purposes.
Attributes: Agility d6, Smarts d10, Spirit d6, Strength d6, Vigor d6
Skills: Fighting d8, Investigation d10, Knowledge d10, Notice d10, Persuasion d6, Riding d6, Shooting d6, Streetwise d10
Charisma: --, Pace: 6”, Parry: 5, Toughness: 6
Edges: Alertness, Brave, Combat Reflexes, Combat Sense, Connections, Dodge, Followers, Reputation, Scholar, Tough as Nails
Hindrances: Code of Honor
Gear: Suit, pocket watch, gun belt, Stetson hat, badge, folding knife (Damage Str + d4, -2 to be noticed), Colt Peacemaker (Range 12/24/48, Damage 2d6+1, RoF 1).

Plot Hooks
The Black Stars could be interested in all of the following business.

Posted by Nate Christen at 6:28 PM