This adventure for Savage Worlds and The Sixth Gun is the capstone of a broad story arc that includes most of the previous supplements and scenarios presented on this blog. 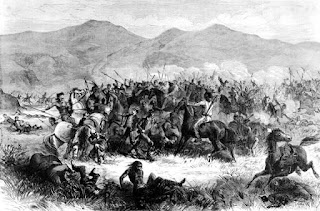 Introduction
For some time now, one group of adventurous souls has been doing business related to the small frontier town known as Smith's Crossing. As they've learned more and more about the town's inhabitants, they've also discovered that some wicked activities are taking place there. What they've learned is only the tip of the iceberg, however, and they'll soon discover that a grand and truly wicked plot is afoot—and one that only they can stop.

Adventure Synopsis
For some time now, evidence has slowly been accumulating regarding some kind of foul plan is in motion around Fort Arneson, a U.S. Army outpost on the western frontier. This comes to a head when the spirit of a young Indian named Little Raven, unable to find peace in the world beyond this one, goes to the PCs for help. He summons them to the town of Smith's Crossing, where an epidemic of cholera has erupted (as detailed in the scenario “A Plague Among You”). In dealing with that, they discover a number of other secrets—notably, that the local doctor and his wife are responsible for the outbreak; they have been taking fluid and tissue samples from their patients and using them to craft poppets; and that they have crafted numerous incendiary devices that have been shipped to the fort disguised as casks of whiskey and other goods.

At the same time, the PCs can learn that a treaty council and related festivities are being held at Fort Arneson. They should also learn that many people who are in attendance there—including the fort's commander, Anders Arneson III—are controlled by Angelica Smith. This means that a direct explanation of what's transpiring isn't enough to foil the Smiths' plan. Rather, the PCs must use every bit of stealth, trickery and brute force that they can muster in order to keep the villains from fomenting a massacre, summoning and binding a crossroads demon, and then forcing it to open a door into the Winding Way.

For the Gun Master
Angelica Smith possesses a copy of the Clavicula Salmonis, a book containing spells for summoning and binding demons, purportedly written by King Solomon himself. That, along with the bombs—which have been in tunnels dug by ghouls in the shape of a pentagram beneath the fort—and the blood shed by those Indians and soldiers and others under her control, should let her complete the ritual and bring a crossroads demon under her sway. That will, in turn, grant her access to the Winding Way, and from there the possibilities will be endless.

Involving the Heroes
This scenario is intended to be the culmination of a slowly developing storyline, one that includes numerous elements with clues to the plot that the PCs have only just recognized. In particular, the scenario “A Plague Among You,” which involves the investigation of a cholera epidemic in Smith's Crossing, provides considerable evidence pointing to this plot. For that reason, this adventure should be run as a direct sequel to that one. It could be possible to run this as a standalone scenario, with a good deal of work on the part of the GM, but even so it would be wise to consult that adventure for more information.

Scene 1—Preparations and Approach
After they've learned everything they can in Smith's Crossing, the PCs should be ready to take action. Before they head out for Fort Arneson, they might want to consider some or all of the following things.
Once they're as ready as possible, the PCs can set out to cross the prairie for the fort.

Going into Harm's Way
At that point it becomes important to know just how they make their approach; a few of the possibilities are outline here.

There's always the chance that the PCs approach openly, in which case they can choose between at least two different tacks. One is to play it coy, acting as if they have no knowledge about any kind of plot. This could require some Persuasion checks opposed to enemy's Notice efforts. More importantly, the GM should keep in mind how much the Smiths and their allies, along with other NPCs, have learned about the PCs' activities. For example, if lots of people saw the PCs storm the Smiths' home at the Crossing, then they likely know that their plot has been discovered. On the other hand, if the PCs have been discrete in their investigation, then they're much more likely to catch the villains off guard.

It's always possible, too, that the PCs go in for a direct confrontation. Given the influence that Angelica Smith holds over a number of the soldiers and Indians (see below for details), this should prove to be a daunting task. As always, though, may players prefer the direct approach.

Secrecy is another option. By approaching NPCs on the edge of the gathering first, the PCs can meet with potential allies and learn more about the situation. In that case, refer to the list of characters who are present, along with their inclinations and loyalties, to adjudicate those interactions.

Scene 2—The Rendezvous and the Ritual
Once the PCs arrive at Fort Arneson, however they do so, refer to the following chart for information about how to set the scene.

The Powers That Be
Presented here are details regarding the major NPCs at the fort.
As always, other characters could certainly be present, depending on previous developments from the campaign, at the GM's discretion.


The Proceedings
When the PCs arrive, the Indians are divided into two circles of tepees, one on each side of the fort's main entrance (with Red Hawk's people to the left, and Standing Bear's people on the right). Unless it is in the middle of the night, the two chieftains, with a couple of warriors each, have gone into the fort for the deliberations. Those take place in a broad tent set up just for that purpose—and located, as it were, on top of the fiery surprise that the Smiths have planned for everyone. Agent Taylor, along with Captain Arneson and a handful of soldiers, are also present. They go about their business of negotiating a treaty until they're interrupted by the PCs.

At that point, Angelica Smith tries to use her influence to subvert the PCs' efforts. This is easier for her if they're wanted for any kinds of crimes, and especially if they've run afoul of Lieutenant Jeffreys. If that's not the case, then Angelica uses her influence over Captain Arneson, having him call for their arrest.

Presenting the Evidence
As long as the PCs do have a chance to tell their story, one of them should make a Persuasion check. As always, the GM should apply bonuses or penalties due to good or bad roleplaying or evidence. Success means that the the PCs convince Captain Arneson that their accusations are true; failoure means they're not so convincing, while a botch results in the commanding officer calling for their immediate arrest.

If the PCs do succeed, then that's when they see the first clear sign of Angelica's influence over the captain. Instead of giving orders to bring in the Smiths for questioning, he instead calls for the PCs to be arrested. Characters who make Notice checks can recognize that he's having some kind of mental struggle, and use of the Detect Arcana power or a relevant skill check can identify that it's something supernatural in origin.

The Tunnels
On the off chance that the PCs discover the tunnels dug beneath Fort Arneson—possibly because of the evidence from Smith's Crossing, combined with the fact that the intended cargo isn't visible in the fort, or through the use of magic—refer to the map above. The tunnels are dug in the shape of a huge pentagram, as indicated, and casks of gunpowder are placed at each spot marked with an X. What is more, those are connected by lines that lead to a magneto blasting detonator (a wooden box with a plunger handle that triggers the explosives). When needed, the ghouls that dug the tunnels can trigger the explosives, starting Angelica's ritual. 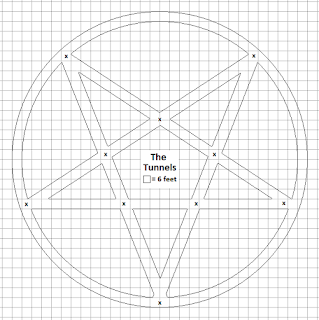 All Hell Breaks Loose
Once the bombs are triggered, all of the tension that has been building up during the treaty negotiation is also ignited, creating the possibility for a horribly bloody battle. At that point, the GM should take into account the following possibilities.

Dr. and Mrs. Smith—Refer to “Bad Medicine” for stats.

Soldiers (39)—Refer to “Soldiers and Officers of the US Army” for stats.

Indians (26)—Refer to “Native People of the American Frontier” for stats.

Little Raven—Refer to “Restless Spirits” and “The Dead Man's Hand” for stats.

Ghouls (one per PC, and possibly more if the PCs have brought allies of their own to the battle)—Refer to pages 76-7 of the Sixth Gun rulebook for stats.

While this situation has the potential of developing into a big, sprawling combat, the action really should focus on the PCs and their efforts to prevent a massacre and apprehend the guilty parties. For that reason, the combat between the soldiers and the Indians can be adjudicated using the mass battles rules from pages 92-3 of the Savage Worlds core rulebook, with the following modifications.
All in all, this should make for an epic confrontation, with the clash between the Indians and the Army playing out in the background as the PCs work to defeat the true villains and spoil the ritual.

Epilogue
As long as the PCs can reveal the Smiths' manipulation of the situation and stop Angelica from completing the ritual, then they can score a major victory. Not only do they defeat a major enemy, but they also prevent an all-out massacre at Fort Arneson. Even so, a lot of unfinished business remains to be resolved.

Further Adventures
Here are just a few of the matters in which the PCs could become involved following the Battle of Fort Arneson.

Posted by Nate Christen at 6:09 AM