Here's a layout for the pirates' hideout, as described in "Darkness and Light." 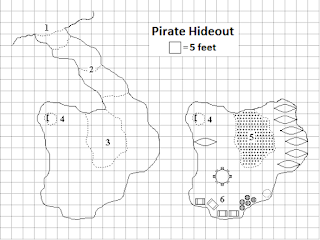 The Pirates' Hideout
The cache used by Martelli's Men is located along the southern coast of the Middle Sea, east of the point where the Great River empties into it. Refer to the map below regarding the area descriptions that follow it.


1. Cave Entrance
The entrance to this cave is completely covered by water at high tide, but partially exposed at low tide. For that reason, it takes a DC 26 Perception check to notice it when the water is high, and the DC falls to 14 when it is low.

2. Tunnel
From the mouth of the cavern, a tunnel with a sandy floor leads up into the main chamber. This requires a DC 0 Climb check, something that isn't likely to matter unless combat is involved. The tunnel rises ten feet at each dotted line, so that the cave's main interior is above the waterline. What is more, the tunnel is protected by a stone of alarm.

3. Collapsing Floor Trap
The pirates dug out this section of the floor, and then covered it with woven reeds covered in loose sand. Noticing it requires a DC 20 Perception check; those who move across it unaware must make a DC 20 Reflex save or fall through it. Those unfortunates plunge down onto the spikes that jut up from the ground on the lower level, suffering 1d6 falling damage along with 1d4 spike attacks at +3 for 1d6+2 damage.

4. Ladder
A hole in the ground here leads down to the cavern's lower level; the pirates have built a crude ladder to allow easy passage.

6. Living Space
The walls of the cavern's lower level are lined with furnishings and supplies brought here by the pirates. Martelli's hammock hangs against the western wall, close to a large table at which the pirates can take their meals and discuss plans for future raids. Opposite them stand another half-dozen hammocks along the eastern wall, where the crew sleep. Of greatest interest, however, is the collection of chests, crates and barrels that rest by the southern wall. These contain X, Y and Z.

Using the Pirate Hideout in an Aetherial Adventures Campaign
This location can tie into all sorts of adventures, including the following possibilities.

Posted by Nate Christen at 4:49 AM