Tales from Homeworld and Beyond: Act of Faith

As I've been developing a setting for Aetherial Adventures, I've also been kicking around some ideas for short stories; this is the first of those. 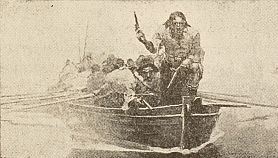 Tales from Homeworld and Beyond: Act of Faith
It was an annual tradition among certain worshipers of Gaea on Homeworld: Every spring they would hire a sailing ship to transport them well up the Great River, which flowed into the southeast end of the Middle Sea, at the time when it swelled with seasonal flooding. This brought new life and greenery to the otherwise barren desert, and thus was a time of prayer and celebration for Gaea's faithful.

This year they'd hired the crew of the Skylark. That was why the setting sun found Konrad and Uriel—along with several other members of the ship's crew—bent to the oars of her longboat, from which a tow cable ran back to the vessel. It was grueling work, but at last it was finished.

“That's it!” Maximilian called from his position in the Skylark's bow. “Drop anchor!”

“Drop anchor!” Horace relayed the order. The crew hastened to comply. He added, “Miss Lucinda, would you inform our passengers that we've arrived?”

“Certainly,” the half-elf replied, and headed aft toward the passenger cabins.

By that time Max, too, had headed back to the sterncastle, where Horace stood next to the sailor at the whipstaff. “What do we do now, Captain?” the halfling asked.

“Now,” the human explained, “we stand back and let our guests conduct their ceremony without any undue scrutiny.”

“Yes. I've been told that it involves, well, ritual bathing.”

“Bathing?” That came from Uriel; he and Konrad, with the others, had returned from towing with the longboat and climbed back aboard. He made a show of sniffing at himself and then gave a lascivious smile. “I could do with a bath.”

“But this is a sacred religious observance,” Horace countered. “Which is why everyone but Lucinda will be confined to quarters belowdecks.”

“Why does she get to stay?” the half-orc protested.

“Because she knows how to exercise discretion,” Horace replied. “Now step to it.”

By this time Gaea's faithful had emerged from the aft cabins, and Max's gaze lingered on a halfling woman with a head full of long, dark curls. “But captain, I can be... discreet.”

Some time later, Horace, Uriel and Konrad, with a few others, were throwing dice in a game of passage, using a cargo crate for a table and water casks for stools. A frustrated Maximilian sat in the corner, working at cleaning some kind of complicated mechanical device.

“What is that, Max?” Horace asked.

“It's one of the 'inventions' that Captain Axelrod gave us, part of his payment for that cargo of foodstuffs. He called it a 'gnomish pepperbox.' I'm starting to think, though, that this one was dropped in seawater, because the mechanism is all fouled.”

“Ah.” Horace stroked one end of his mustache. “Well, do what you can, but don't—”
He was interrupted by the thudding of footsteps coming down the ladder from above. “Captain,” Lucinda announced. “We have an unexpected guest.”

“Lead the way.” With that, the captain and other officers head up to the main deck, where a shining panoply of stars filled the night sky. What drew their attention first, however, was the green-skinned, reptilian figure that lied on the deck, gasping for breath, surrounded by Gaea's faithful.

“What in hell?” Horace started to ask, but Lucinda moved past him to kneel beside the creature, who'd stirred and begun to whisper between gasps in a language other than the Common Tongue.

“She says,” the half-elf translated, “she wants our help.”

“She says,” Lucinda's eyes went wide. “She says, 'They took our children.'”

Before anyone else could respond, Max interjected. “Wait. What's that?”

Over the murmur of the flowing river and the occasional noise of a bird in the surrounding greenery, they could hear the subtle but distinctive sound of boats being rowed with muffled oarlocks.

“All hands,” Horace hissed, “prepare for battle. And do it quietly.” The crew scrambled to do so, with the officers passing out cutlasses and light crossbows. Suitably equipped, they moved to positions around the ship's siderails, while the worshipers of Gaea gathered in the middle of the deck around the mainmast.

“You should head back to your cabins,” Horace warned them.

“No,” the halfling objected. “If there is battle, and your crew members are injured, then we can help them.”

“Fair enough,” the Captain replied. Then he looked to Max. “Keep an eye on them.”

“Aye-aye.” The rogue, drawing his rapier, moved among the passengers.

Moments later a trio of longboats emerged in different directions from the surrounding darkness. Each had a quarter of burly and rough-looking sailors at the oars, along with armed enforcers in the bow and stern.

“Ahoy!” a man in the front of one longboat called. “Ahoy, Skylark!”

“Ahoy!” Horace responded. “What is your business here?”

The other man smiled. He was a human, wearing a tricorn hat and a brass-buttoned jacket. “I am Captain Arturo Martelli. My men and I have lost something of value, and seek to reclaim it.”

Lucinda and Horace exchanged knowing glances; they both recognized the name of the pirate known as “The Hammer,” a man who neither asked for nor offered quarter in battle.

Then the captain of the Skylark looked to the exhausted lizard woman, whom the Gaeans had moved amidst themselves. “And what is that?” he asked.

“A slave, one of little value to any but us.”

Horace steeled himself. “And if we refuse?”

Martelli smiled, an expression devoid of warmth, and gestured toward his underlings. While many carried cutlasses and crossbows of their own, others produced bottles filled with some kind of liquid and with rags tucked into the ends. Striking flint and steel, they ignited their incendiaries. “If you refuse,” he continued, “then we will burn your ship to the waterline, and shoot anyone who tries to escape from it.” Without waiting for a response, he commanded the sailors in his boat to row it toward the Skylark. Then he and two of his fellows climbed aboard. Accepting a fire bottle from one of them, Martelli held it aloft. “It's your decision, of course, but I encourage you to choose... wisely.”

“You can't!” someone objected. It was the halfling who'd caught Max's eye. “This is a child of Gaea, and slavery is a violation of Her will.”

“Her will?” Martelli spat. “Gaea's will? Woman, the only thing you need to worry about is the will of Arturo Martelli and his pirates.”

It took a moment for everyone to realize who'd spoken: Max.

“What?” Martelli asked.
“I said you're wrong,” the halfling persisted. “If Gaea doesn't want you to harm a creature, then She won't let you do so.”

The halfling stroked his chin for a moment, and then produced an item from his satchel—the gnomish pepperbox.

Although the pirates brandished their swords, Max gripped the weapon by its barrel and offered it to one of them. With two quick gestures he sprinkled powder in the firing pan and cocked the hammer. “Do what you will,” he declared, “but Gaea will not let you harm me.”

The other accepted the weapon, and then looked to Martelli. He received a curious look and a nod in response. Then the pirate pointed the pistol at Max and pulled the trigger.

It exploded in his hand.

The 'Larks moved quickly during the ensuing confusion. Horace and Uriel pulled their swords and stepped up to attack, while Konrad invoked a blessing from Ptah and then hefted his warhammer. Lucinda turned on those pirates who carried firebombs and hit them with a gout of flame from her fingertips. Captain Martelli was engulfed when his bottle exploded; he plunged over the rail, into the water. Seeing that, the others began clambering or leaping overboard. Within moments they had disappeared with their longboats back into the night.

Afterward, while Horace and Konrad attended to the wounded and Lucinda sent her familiar to bring news of the attack to the local authorities, the halfling cleric approached Max. She considered him for a moment and then asked, “How did you know?”

“How did you know that you wouldn't be hurt?”

Max smiled. “You, my lady, should understand. It's not about knowing, but about believing.”