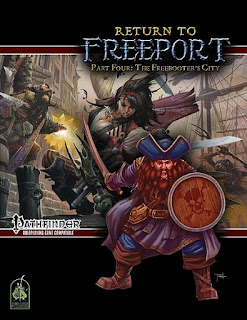 I downloaded this adventure, Part 4 of the Return to Freeport campaign, more than seven months ago, and it's been sitting on my hard drive since then because I've been busy with other things—and I'm still waiting to see Part 6 published before I start preparing to run this campaign. Just now I finished reading it, however, and thought I should review it. First and foremost, this scenario involves plenty of roleplaying situations, with very little combat actually required. That is, in my mind, both good and bad, for the following reasons.

On the downside, I think a GM wanting to use it with a typical group of players would need to add more fighting to it. I've run the occasional session that didn't have any combat, maybe once each campaign, but having that happen over and over again would eventually be disappointing for may players. The scenario suggests using random encounters from the table in Part 1, but I fear that they'd not be challenging enough for eighth-level characters. Even so, there are lots of potential enemies in the Freeport: The City of Adventure and Freeport Bestiary books, so it shouldn't take too much for a GM to create more combat-oriented subplots for the PCs.

The upside of the emphasis on roleplaying is that it really weaves the PCs into the fabric of the city. That is, after all, for me the most appealing element of the campaign setting; it starts to feel familiar, and like the PCs are an important part of the city's history and future. With that in mind, I'm pleased with the direction this campaign is taking, and I look forward to the next two installments.