Sky Islands of the Djinn on Freya 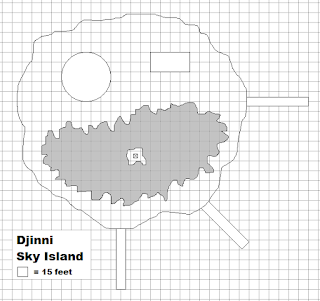 Because of the unusually dense atmosphere on the planet Freya, it's possible for lightweight structures to float in the air. For this reason, certain enterprising djinn have crafted sky islands on which to live. One example of such is this location, the home of Khalid al-Nasr—known to some of the locals as “Jibal al-Nasr,” or “Mountain of the Hawk.” It consists of a large body of crystal, with three docking platforms extending off from it. In addition to a broad forested grove, which boasts various fruit trees and contains the island's elemental obelisk, there are a long, low building for stables and storage, and the djinni's tower.

Please refer to the appropriate maps for the following location descriptions. 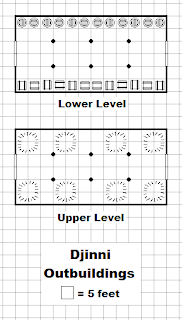 Outbuildings
Not far from the docking platforms is this two-story stone structure. The bottom half is filled with barrels, crates and other items; a row of pillars supports the ceiling, twenty feet high. The second story is laid out in a similar manner, but is filled with nests for the dragonnes that patrol the skies around the sky island. Both floors have sets of double doors on either end.

Posted by Nate Christen at 7:25 PM