This post finishes up another PDF compilation, to which I link below. At the same time, it presents two flags, and provides suggestions for using flags in a ship-based RPG campaign.

Flags
An important element of interaction between vessels—be it at sea or in the aether—is how they communicate with flags that they carry. In addition to drawing up deck plans for their vessels, it behooves players to design the emblem under which they sail. What is more, here are two more flags for organizations in the Sol Space campaign setting. 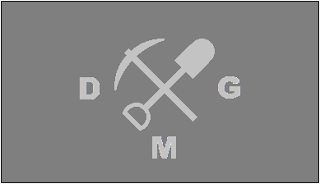 The Dwarven Mining Guild
This flag includes the crossed pick and shovel, the tools of the dwarves' trade, along with
their organization's initials. The darker grey represents the stone from which they
claim valuable ore, while the lighter color represents the refined metals.

The Sol Society
Central to this ensign is, of course, the sun. It sits amdist a bright blue background,
which represents the light of hope that comes from worshiping Sol.

Using Flags in a Ship-Based RPG Campaign
The flags that ships carry can be used in all sorts of ways during a ship-based campaign; a few of the possibilities are listed below.

Posted by Nate Christen at 8:59 PM