I think I've said before that one of great things about a historical D&D campaign is how all the legends and tales from around the world form background the setting. Such is the case with this article, inspired by a Wikipedia article I found while reading about Alexander the Great.


Thessalonike of Macedon
According to history, Thessalonike of Macedon was the daughter of King Philip and thus half-sister of Alexander the Great. Legend has it that she was once visited by him, after he'd obtained the Elixir of Life, and that he used it to wash her hair, granting her tremendous longevity. Upon his death she tried to commit suicide by throwing herself into the sea, but the magic prevented her from dying. Instead she was transformed into something aking to a mermaid, one that possessed considerable power but that was also very fickle. 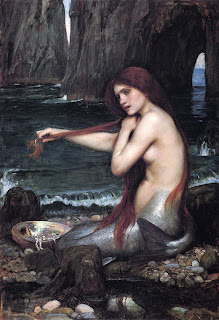 The stories say that she would stop passing ships and ask the sailors:

The proper answer is:

At first appearance, Thessalonike appears no different from other kinds of merfolk; she has the upper body of a beautiful Greek woman, and the lower body of a fish. Her true appearance is revealed, however, if an unfortunate individual answers her question incorrectly.

COMBAT
A medusa tries to disguise its true nature until the intended victim is within range of its petrifying gaze, using subterfuge and bluffing games to convince the target that there is no danger. It uses normal weapons to attack those who avert their eyes or survive its gaze, while its poisonous snakes strike at adjacent opponents.

Ship Model Ritual (Su): Unlike other sea witches, Thessalonike does not require material components or the expenditure of experience points to use the ship model ritual. Instead she can use it once per vessel encountered, either to help or harm the ship in question.

*This spell is detailed in the Corsair rules supplement.

Using Thessalonike
Alexander's sister could be used in a campaign in many different ways; a few of the possibilities are detailed here.
Posted by Nate Christen at 3:43 PM