This post marks the end of a lengthy process. For a while I've been working on deck plans for a galleon, but I hadn't found a base design that really worked for me. While reading the book The Spanish Main, however--part of the excellent Seafarers series by Time-Life Books--I found a set of pictures by an artist (I think) named John Batchelor. This provided side and top-down views, along with a cross-section, and it just worked.

Also, based on a post from Black Vulmea's enjoyable Really Bad Eggs blog, I present to you my pirate name.

You're the pirate everyone else wants to throw in the ocean -- not to get rid of you, you understand; just to get rid of the smell. You're musical, and you've got a certain style if not flair. You'll do just fine. Arr!
Get your own pirate name from piratequiz.com.
part of the fidius.org network

If you want, take the quiz yourself and discover your own pirate moniker. 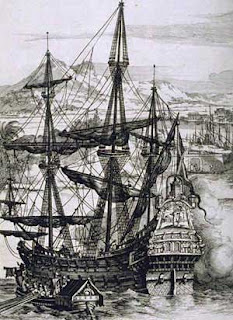 The Galleon
No vessel better represents the majesty of a ship at sea than the galleon. Although they are most closely associated with the Spanish fleet in the New World, these ships play an integral role in many navies and merchant endeavors.

The following area descriptions are pretty standard for this type of vessel, but by no means comprehensive. Individual captains and crews, as is their want, are likely to modify their vessels to suit their own styles and needs. 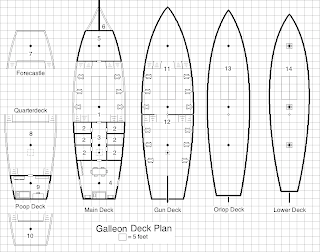 1. Main Deck
This broad area is flanked forward by the forecastle, and aft by the quarterdeck. The mainmast juts upward from it, while the cargo hatch and stairways provide access to lower levels. Some vessels carry six cannon on this deck, three to each side.

2. Passenger Cabins
Six small cabins in this area can provide sleeping space for a variety of passenger, or even for lesser officers aboard a ship.

3. Steering Station
In older vessels, before the advent of a ship's wheel connected by chains to the rudder, the ship is steered by a crew member in control of the whipstaff here. A raised section of the roof overhead allows this person to communicate with the captain on the quarterdeck.

4. Great Cabin (Captain)
This large cabin provides space for the captain, along with room enough for hosting meals and meetings. A typical arrangement of furnishings could include a bed, writing desk and wardrobe, along with a table and chairs.

5. Crew Quarters
Despite this area's relatively small size, it can easily hold a dozen hammocks or more. Given that crew members tend to share this sleeping space when they are not on duty, this allows a large number of sailors to be quartered here.

6. Beak
This open area in front of the forecastle is used for little more than storage.

7. Forecastle
The raised platform here is common on merchant and military vessels, but pirates often remove it to provide more open space for combat. As a result, members of a pirate crew are forced to sleep on the open deck or to string up a hammock somewhere belowdecks. The foremast protrudes through here.

8. Quarterdeck
A short set of stairs leads from the main deck up to here, and another leads from here up to the poop deck. The mizzenmast rises up through this area.

9. Sailing Master's Cabin
The person in charge of plotting the ship's course is quartered here, with a view better than that of anyone other than the lookouts in the rigging overhead. This cabin is outfitted much like the captain's cabin, albeit without the table and chairs for hosting.

10. Poop Deck
At the very aft of the ship is this raised deck, from which the bonaventure mast rises. In the back of this area is the transom, on which the ship's name is usually painted; one or more bright lanterns are often mounted here, too, to provide illumination for crew members working during the night.

11. Gun Deck
Underneath the main deck is this level. It is most often filled with cannon, with gunports cut in the sides. At least six cannon can fit on a side, with perhaps a couple more facing aft as chase guns. Depending on the needs of the crew, their could be some hammocks strung up in the middle of the deck to provided more sleeping space.

12. Bilge Pump
In the middle of the gun deck stands this structure, one that is both loved and hated by sailors. While it can often mean the difference between surviving and returning to life on land, or finding one's death in the cold embrace of the sea, it can also make for brutal labor when the hull is badly damaged. One pipe leads down from here to the lower deck, while another juts out through the ship's starboard side.

13. Orlop Deck
This deck, along with the one below it, provide most of the space for cargo and supplies aboard the ship. As such, both can be divided as necessary by erecting temporary bulkheads. For example, one section might hold the ship's water barrels, while another is filled with spare timber, rope and canvas. There could also be a sealed rooms for holding treasure or weapons. Finally, extra space for passengers, especially soldiers, can be set up here.

14. Lower Deck
All of the masts except the bonaventure mast have their steps here, and the pipe leading up to the bilge pumps can also be found runs through the floor here to reach the bilge. Other than that, this area functions in the same manner as the orlop deck, with one exception. Given that it is hard to keep this deck dry, it's not likely that people are quartered here.
Posted by Nate Christen at 12:17 PM