In the event of a worst-case scenario during an adventure, this interlude provides suggestions for what happens if the PC's are caught ad imprisoned, along with how they might escape.


Interlude 31: The Escape
There comes a time in the career of every adventuring party when things just don't work out right. Perhaps the PC's are beaten into unconsciousness and left for dead, or maybe they find themselves in a no-win situation and actually surrender. Whatever the case, they could wind up being held prisoner, either aboard a ship or in a building on land. Rather than being an unhappy ending, this situation instead can make for a truly engaging scene, as they look devise an escape plan and settle the score. Should this situation arise, the GM would do well to consider the following factors.

Taking Stock of the Situation
First and foremost, the PC's find themselves stripped of all possessions. This should make for a particularly challenging situation, given that they're probably accustomed to having their chosen weapons and other equipment.
Imprisonment
Once the PC's are locked away in confinement, it could be important to have some details about their dwelling. As mentioned above, this could happen aboard a ship at sea; in such a case, refer to the deck plans for a sloop, a slave ship or even a galley. Indeed, serving aboard a galley was especially common in those countries surrounding the Mediterranean Sea. On the other hand, if they are in a port city, use the floor plan for an appropriate building. Unless they're brought to a major fort, such as Cape Coast Castle, the chances are good that they find themselves in an impromptu prison, often a converted warehouse. 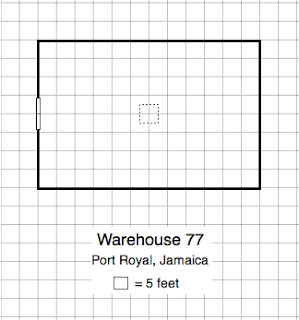 It has a door of iron-banded wood sealed with a stout padlock (DC 20 to open; hardness 10 and 30 hit points). What is more, shackles are added around the walls, and captives are kept locked in them. Buckets serve for inmates' toilet needs, and bowls of soup and hunks of bread are provided for meals. Guards are usually posted outside the door, with the number assigned depending on the size of the incarcerated party along with the reputations of the prisoners.

This is only a temporary measure, of course, a holdover until the PC's can be transferred to a more secure location, something like Cape Coast Castle.

Paying the Price
As part of their incarceration, the PC's are likely to face some kind of punishment. This could include humiliation at the hands of an enemy, physical labor, or perhaps even torture. While the GM should not overdo this part of the situation, it can be an effective means by which to establish an enemy. For example, if the PC's are subjected to the not-so-tender mercies of a jailer who whips them while they haul heavy stones as part of a work detail—thereby inflicting subdual damage an perhaps even fatigue upon them—it can create more dire circumstances, and make the scene even more engagin once they have a chance for some comeuppance.

A trial could be an opportunity for engaging roleplaying. Should this occur, each of the PC's is brought before the court and accused of his/her crimes; the judge asks questions, while witnesses present their own versions of the events in question. It could make for an especially lively discussion if the PC's have differing opinions about the facts of the matter.

A Little Help
During their incarceration, the PC's might have a chance to work with one or more allies. Some of the possibilities for this include the following.

Choosing the Right Moment
Another important consideration is where and when to take action. Likely moments include while being forced to participate in a work detail (in Algiers, for example), or while being escorted to the place of judgement or execution (as might happen in Port Royal or other places). Other preparations should lead up to this moment, building a sense of tension and anticipation. Once the escape effort begins, the action should be fast and furious. Something akin to a running chase is probably best, rather than having the PC's stand and fight all of their enemies. Although this might mean that some opponents survive, this only makes for an even more memorable confrontation in the future. Similarly, this could mean that they are forced to leave behind valued possessions and the like.

Making an Exit
Once the deed is done, it behooves the PC's to move as far away from the scene of the action as they can, and as quickly as possible. Therefore, having a vessel—or at least horses—available is advisable. As long as they can put some distance between themselves and the long arm of the law, the PC's can live to fight another day.

Posted by Nate Christen at 6:36 AM