Today's post is an adaptation of a map from this blog's first adventure, providing a deck plan for a dhow or fishing boat. 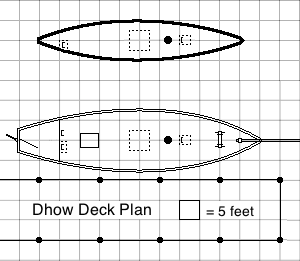 The Dhow
While bigger ships are a crucial component of the quintessential scenario for action at sea, trading broadsides, smaller vessels are also important. After all, they can be used for running up rivers into unknown lands, making small-scale raids and the like.

Refer to the appropriate map for the layout of the ship. Unlike larger vessels, the dhow doesn't have separate cabins in the back; rather, there's a raised deck from which the tiller is operated. Beneath it is a narrow space that provides some cover from the elements, accessible by a short ladder. On the opposite side of the ship another such ladder leads below decks into a cramped space that serves as hold and sleeping quarters for the crew. There's another such ladder forward, in front of the mast. Vessels like this one are generally lateen-rigged, with one large triangular sail.
Posted by Nate Christen at 10:08 AM