I'm a sucker for roleplaying games that involve deck plans. That's probably why a lot of my favorite campaigns have involved them. There were an epic Spelljammer game in junior high and high school, numerous Star Wars campaigns in college, and then three forays out of Freeport and the start of a voyage across the starlit sea in third-edition D&D and Pathfinder. The element I particularly enjoyed was taking a deck plan, making modifications to it, and then deciding where different characters had their quarters. This was particularly fun in the Spelljammer game since, by the end of it, each of the PC's had his own ship as part of the party's armada.

This article, then, provides suggestions for doing just this sort of thing in a Skull & Bones campaign.


Interlude 25: The Refitting
It was a common practice for a pirate crew, after taking its first prize, to refit the vessel. This was when the ship's carpenter had a chance to shine, by adding, modifying or removing bulkheads and other features, cutting out extra gun ports and sometimes even cutting out an entire forecastle or moving a mast. In this way the pirates could take an ordinary merchant vessel and turn into a real sea rover, and into their own floating home.

The same thing can be a fun element in a Skull & Bones campaign. The PC's can take an old deck plan and modify it, adding cabins for themselves and important NPC's, and making any other changes they desire. Take, for example, the plan for a slave ship shown previously. Presented here is the same footprint, now modified to serve as a pirate vessel. Area 2, which had been a special hold, is divided into four separate cabins. The shelves have been removed from the middle and lower decks, making room for ten cannon on each side, with gun ports to match. These are, of course, only a couple of the possibilities, and players are likely to have their own ideas for how to customize their ship. 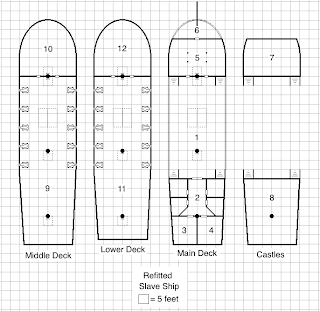 In game terms, most of this (outside of adding the cannon) can be handled with a series of Craft: carpentry skill checks. A skilled PC could lead the work; otherwise, it might be necessary to hire an expert NPC. This could also require going shopping or staging a raid for supplies. It's also important to identify specific quarters and label them, as this creates default locations for the characters when future encounters happen.

Finally, if anyone has access to graph paper with one-inch squares, it could be nice to draw out the finished plan in order to reuse it from session to session.
Posted by Nate Christen at 6:34 AM