Two Previews: Training Program for the OSS and Con of the North 2022

This post serves as a preview for both Training Program for the O.S.S., which I will release on Saturday, and for The Templar Vessel, a new scenario that I'll be running at Con of the North in the Twin Cities on Presidents Day weekend. Here's the cover for the prior.

Presented below, then, are two examples of dossiers that might be issued to O.S.S. agents.

The first is for university Professor Stanley M. Hall, a potential ally who could recruit the heroes.

The second is for Yelena Valentinov, who might be a rival or even an enemy. 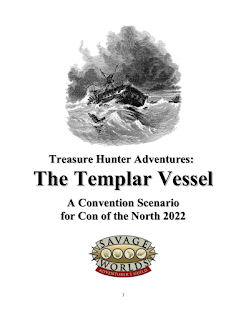 Finally, here is the cover for The Templar Vessel.

Posted by Nate Christen at 3:58 AM