Here's the second adventure from my current campaign, set in the world of The Sixth Gun and Shadow Roads comics. 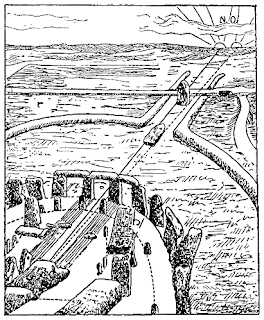 The year 1887 brings a great celebration to the United Kingdom. It marks the fiftieth anniversary of Queen Victoria taking the throne, an almost unprecedented term of leadesrship. For that reason, notable people from around the British Empire have gathered in London for the festivities. Even so, not all is well in this nation. There is the matter of Ireland, and many wish that it could be granted independence from British control. To that end, a group of dissidents who see themselves as inheriting the legacy of the Druids has gathered at Stonehenge; their plan is to build and then burn a wicker man—one that contains effigies, of course—as a form of protest. What they don't know is that agents of the Cabal, a sinister occult secret society, have infiltrated their organization, and plan to usurp the proceedings for their own purpose.

This adventure is a direct sequel to the scenario The Depths of Depravity; it begins while the heroes are still present, along with agents from the Special Branch of Scotland Yard, investigating the apothecary shop in which the Cabal was operating. There they can intercept a message sent via pigeon, which hopefully sends them in a race to Stonehenge to foil that occult group's next vile plot. Along the way they face more challenges, too.

For the Gun Master

The agents of the Cabal who have infiltrated this ritualistic protest plan to conduct an actual demonic summoning; to that end, they have kidnapped real victims—urchins from London and others who aren't likely to be missed—and drugged them with Slumber draughts. Those will be burned alive, then, instead of the effigies. All the while they will chant their occult rites, thereby bringing something truly terrifying into this world.

As is mentioned above, this scenario assumes that the heroes participated in the events of The Depths of Depravity, and thus are present when a messenger pigeon arrives outside of the apothecary shop. If that is not the case, then perhaps they are simply nearby when Constable Roode and others raid that establishment, and are watching the aftermath of those events when the bird in questions makes its appearance.

Those heroes who are present at the apothecary shop should make Notice checks; success recognizes that one of the pigeons pecking around at the ground outside the building has a message tied to its leg. While catching the bird should be a relatively easy matter, the GM should deal out cards for initiative as usual; one never knows what shenanigans might ensue during the attempt.

This small bird is quick and agile if not very bright. It has the uncanny ability to find its way home.

Gear: Message (tied to its leg).

As long as the heroes can catch the bird, they can untie and read the message slip.

The members of the Order are in place, ready to usurp the ceremony for our own ritual.

We will strike during the high point of summer, in the ancient and revered location.

Common Knowledge checks, or Academics at +2, let characters recognize that “the high point of summer” refers to the summer solstice, which occurs on that very same day. Similarly, “the ancient and revered location” is a reference to Stonehenge, which lies some two hours from London via train. Having already seen what the Cabal is capable of doing to harm others, Constable Roode implores the heroes to help investigate this new danger. Although they don't have much time to do so, they should be able to purchase some supplies or make other preparations before catching the next train bound for Salisbury.

This London “bobby” takes his duty quite seriously—especially at a time as important as this, what with Her Majesty's Jubilee taking place, and important people from all around the Empire attending. Roode has definitely experienced the rougher side of the city, since he patrols the streets of the less genteel neighborhoods at night, but even he is not prepared to see what the Cabal has unleashed down in the sewers.

Refer to the supplement The Train, cited above, to find a layout for these events. The first part of the train ride goes smoothly, and is perhaps even pleasant; there is something of a festival atmosphere, as many of the people aboard the train are heading out to Salisbury for the gathering taking place there. In fact, this might be a good opportunity for the GM to introduce other NPCs, perhaps characters with past connections to the heroes, or ones who might provide links to future adventures.

At about the halfway point, however, heroes who are in a position to do so should make Notice checks to spot riders on horseback approaching from one side of the train, ones who come alongside one of the cars and begin climbing aboard. At this point, the GM should deal for initiative.

Cabal Thieves: Refer to the supplement The Cabal for stats.

The bandits' plan is a relatively simple one. They've been asked to prevent the heroes from reaching Stonehenge, and so intend to uncouple their passenger car from the rest of the train, leaving them stranded in the middle of Salisbury Plain. Accomplishing this requires a series of successful actions:

Success in all three of these efforts leaves the heroes' car—and all of the ones behind it—stranded. No doubt the heroes have something to say about this, too. This should make for some exciting action, inside, between and perhaps even on top of the moving train cars. 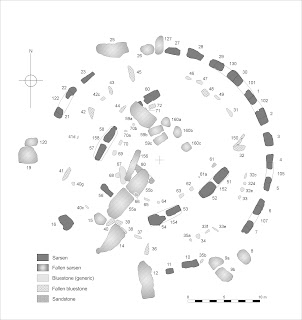 There is a sizable crowd gathered at Stonehenge if and when the heroes arrive there. Some have set out picnic meals, while others have been consuming alcoholic beverages for much of the afternoon. While many are just curious, there is a strong anti-government feeling among a fair number. The sun is just beginning to set, and so anticipation for the coming ritual is growing.

To the west of Stonehenge is the protesters' encampment, which consists of numerous tents. Some are smaller, for a few individuals; others are larger, used in staging this event. A few are presented below, and the Appendix contains printable layouts that can be customized and used on the tabletop. The GM should feel free to modify the arrangement depending on how much exploring the heroes do prior to a confrontation, and how creative they might be once that occurs. Here are some suggestions for what would be included:

Here again, the GM can tailor the level of opposition based on how combat-focused the heroes are. There are a number of toughs, hired muscle who help haul supplies and act as enforcers, along with the occultists who will be conducting the ritual.

Mercenary (Novice): Refer to The Cabal for stats.

Mercenary (Seasoned): Refer to The Cabal for stats.

Occultists (Novice): Refer to The Cabal for stats.

Occultist (Veteran): Refer to The Cabal for stats.

The Crowd: Use the stats for Common Folk from page 83 of The Sixth Gun RPG.

The crowd members might become involved in this confrontation, if they think the heroes are trying to disrupt this act of protest.

In addition to their personal weapons and equipment, the Cabal agents possess a few items of value.

Success here prevents another great tragedy, in this case one that would have specific victims who are quite grateful for having been rescued. The crowd of protesters, too, can be mollified if they are presented with suitable explanations and/or evidence. Finally, Constable Roode can always vouch for the heroes if they find themselves over their heads.

Detailed here are just a few of the possibilities for additional business in which the heroes could become entangled. 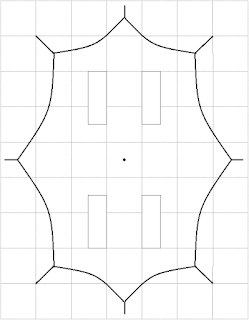 Presented here are one-inch scale maps that the GM can print and use on the tabletop. 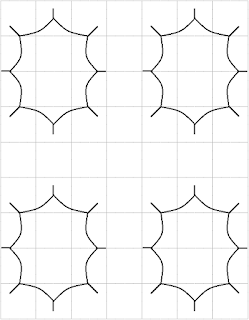 Posted by Nate Christen at 7:57 PM