The Depths of Depravity

This full scenario, for use with the Savage Worlds RPG, takes place in the setting of the Shadow Roads and The Sixth Gun comics.

The Depths of Depravity 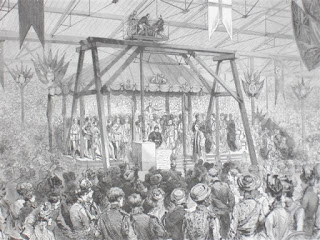 The year 1887 brings a time of great celebration to the United Kingdom. It marks the Golden Jubilee of Queen Victoria, drawing nobility and common folk from around the world—including a visit from Buffalo Bill Cody's Wild West Show! What few know, however, is that there's a wicked plot afoot, one that threatens to spoil the festivities and kill many innocent people. Agents of an occult organization known as the Cabal have been studying diabolical lore, and one of their number has even managed to summon a plague spawn demon (page 75 of T6G). The demon has already begun to spread its corrupting disease, and it's only a matter of time before a diabolical epidemic erupts.

This adventure begins for the heroes late on a London evening, in the vicinity of a warehouse that is home to a bear fighting ring. They hear screaming and shouting, and upon investigating discover that a bear is on the loose and attacking passersby! Once the threat of the bear has ended, a constable at the scene asks their help with investigating further. If they are willing, then the trail leads them through a bear fighting ring, where they must deal with maddened dogs, and down into the sewers beneath London, where rats are helping to spread the disease. In the end, they can find the secret laboratory in which a Cabal occultist has summoned the demon, where they can end the threat once and for all.

For the Gun Master

Alastair Novak is the occultist who summoned the plague spawn demon. While he has it contained down in the sewer via a magic circle, the demon has infected a swarm of rats. They, in turn, infected a dog from the fighting ring, which attacked one of the caged bears. If the spread is not stopped, then all of London could soon be in danger.

In this case, the heroes find themselves in the wrong place at the wrong time—out in a London street on the evening of 19 June 1887—when they are caught in the middle of the unfolding plot.

The Gun Master should deal for initiative. On their actions, characters who make Notice checks can recognize the direction from which the noise is coming, and then head that way if they so choose. Coming around the corner, they recognize the source of the disturbance—a local public house.

When the heroes arrive on the scene, they find the barkeep is hunkered down behind a toppled table in the corner by the door, with the bear on the other side of it. The bear is maddened by infection from the plague spawn demon; it has escaped from its cage in the fighting ring (see below) and seeks to feed on any possible victim. For that reason, it can only be stopped by incapacitating it. 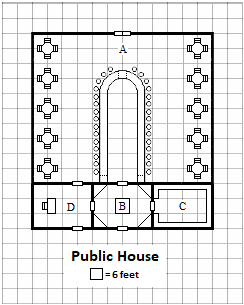 Inside the public house is a broad common room (A), dominated by a bar against the far wall that is surrounded by stools, along with tables and chairs along the outside walls. Behind the bar is a small prep area (B), from which a door leads to storeroom (C). The walls of that room are lined with shelves containing all manner of bottles, extra glasses and the like. Beneath those shelves are barrels of beer and casks of wine. Finally, a small room (D) provides a checkpoint for people who wish to visit the bear fighting ring; another door in the back wall leads into the adjacent warehouse, in which the animal fights are staged.

Barkeeper: Refer to Common Folk on page 83 of The Sixth Gun RPG for stats.

If they save his life, the barkeep can tell the heroes that the bear came charging through Area D, and will even confess to the illicit nature of the matches which are staged there. What is more, heroes who succeed at Notice checks see that the bear has lots of foamy saliva around its mouth. 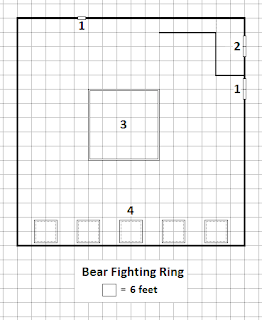 The animal fighting ring is built from an old warehouse, one that is two stories in height. It has three points of entry; two are doors at ground level (1), while the third sits atop a loading dock (2) from which a ramp leads down to the ground. In the middle of the building is a waist-high ring (3) in which the matches take place. Against one wall are positioned a handful of cages (4), all but one of which are currently empty. That last one is now home to a few dogs (mastiffs) that were used in the bear baiting.

Mastiffs: Refer to page 181 of SWADE for stats.

After they have dealt with the mastiffs, the heroes can learn more by investigating. Notice checks reveal a number of dead rats inside the cage that held the mastiffs; Survival efforts can track the rats back to a grate centered in the floor of the fighting ring. A Healing check, or Notice or Survival at -2, reveals that the dogs look emaciated, as if they had been starving. Similarly, both the dogs and the rats have traces of foam around their mouths. 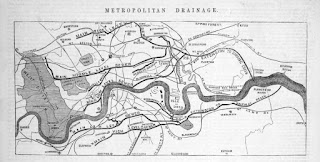 Once the heroes have had a chance to look around a bit, a local constable named Francis Roode arrives on the scene. He asks the heroes to explain what has happened, and can even attempt some of the skill checks to learn more if they have not been successful. Then he considers the matter for a bit before making a proposal: “Given all the hullabaloo for Her Majesty's jubilee, will you help me make sure that there's no threat to London here?”

This London “bobby” takes his duty quite seriously—especially at a time as important as this, what with Her Majesty's Jubilee taking place, and important people from all around the Empire attending. Roode has definitely experienced the rougher side of the city, since he patrols the streets of the less genteel neighborhoods at night, but even he is not prepared to see what the Cabal has unleashed down in the sewers.

The heroes, of course, have put themselves at risk twice already, and Roode can't offer much by way of a reward. (“You'd be doing a service to me, the Metropolitan Police, and to Her Majesty.”) Even so, if the heroes do agree to help, then they can investigate further by venturing into the network of sewer tunnels beneath London. 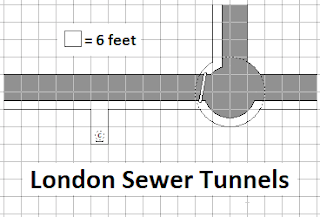 Refer to the map above for the following descriptions. The sewers consist primarily of long tunnels, twelve feet in diameter. A narrow walkway extends along one side of the tunnel, about six feet above the bottom of the channel. The channel itself is filled with water containing all manner of putrid materials—everything that is dumped in by the Londoners, including the contents of chamber pots, unused parts of animals and other foodstuffs, and the like.

Occasionally two tunnels converge, in a circular chamber that is twice as wide and tall. There the contents of the two streams swirl together before flowing onward, toward the Thames. Note that in these chambers the stone walkways sometimes end, but stout boards have been laid across those gaps. It takes an Agility check to cross those boards, with no penalty for failure unless the result of the check is a Botch. Jumping the span requires crossing a nine-foot gap.

Finally, at periodic locations along the tunnel there is a recess in which a ladder leads up to the surface. It is in one such place that Roode accompanies any willing heroes down into the sewers.

The heroes have various options when it comes to tracking the infected rats, including the following possibilities.

Plague Spawn Demon: Refer to page 75 of The Sixth Gun RPG for stats. 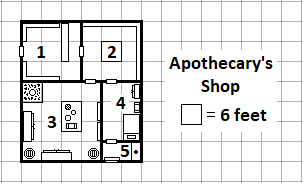 Eventually the trail leads to a stretch of sewer tunnel in which the side passage sits beneath the privy of an apothecary's shop. This is where the agents of the Cabal summoned the plague spawn demon, and unleashed it upon London. Refer to the map above for the following location descriptions.

The front door of the shop opens into the front room (1), where most business is conducted. It has a counter behind which the clerk stands, and the walls are lined with shelves containing various elixirs, powders and other items of a mundane nature. Behind the counter a door leads back into the storeroom (2), where more innocuous wares, along with a few truly magical ones, are kept. From there one door leads into the workroom (3), which has a fireplace in the corner, a work table in the middle, and cabinets and barrels along the walls. This is where the actual magic happens. The other door from the storeroom leads into a small bedroom (4), which is furnished with a bed, storage trunk and wardrobe. Finally, a door from there leads to the privy (5), which could be where the heroes first enter this establishment.

The apothecary, Alastair Novak, is an agent of the Cabal. He is accompanied by mercenaries who also serve that organization. Their exact number is left up to the GM, depending on how many heroes are in the party. Whatever the case, they do not take kindly to intruders, and should be treated as hostile in regard to Persuasion efforts used against them. More than likely, there's going to be a fight.

Alastair Novak: Refer to the supplement The Cabal for stats.

Mercenaries: Refer to the supplement The Cabal for stats.

For his part, Novak uses the Armor power first to protect himself, and then Boost Trait to support the mercenaries. If he runs out of power points, then he opens fire with his pistol. The mercenaries rush to attack, using their pistols first and then pulling their knives when needed.

In addition to the items carried by Alistair Novak and his mercenaries, in the workroom the heroes can find pages of arcane symbols and ritual passages copied from the Lesser Key of Solomon, a text that describes rituals for communing with, summoning and binding demons. Note that these are not the original text itself, but rather Alistair's transcription and notes from that text.

Success here over Novak and his mercenaries means that the heroes have won an important victory, preventing the spread of a terrible plague. What is more, they've gained their first glimpse into an even wider conspiracy that still threatens London and England. That, combined with the fact that they've (hopefully) made an ally in the form of Constable Frank Roode, means that they're likely to have more adventures again soon.

Detailed here are just a few of the possibilities for additional business in which the heroes can become entangled.

Posted by Nate Christen at 3:43 PM