Here's the first preview of Treasure Hunter Adventures 5: Saints & Sinners. It presents one of the five relics from the supplement, the Palladium. 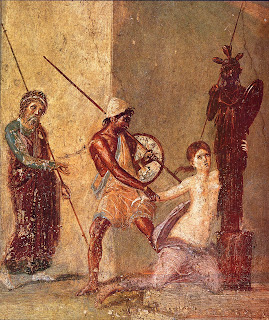 Tales of the Trojan War tell of how some of the Greek warriors, led by Odysseus and Diomedes, snuck into the city to steal a wooden statue of Athena that had granted protection to Troy. Some maintain that Diomedes carried it away, eventually to Rome—where it granted its blessing to that city and was cared for by the Vestal virgins—while others claim that it was stolen from him while he sailed across the Mediterranean. Whatever the case, it is widely agreed that the loss of the Palladium helped turn the tide of the War, eventually leading to the downfall caused by the stratagem of the Trojan horse.

The Palladium has the following attributes.

Posted by Nate Christen at 4:11 AM