This post provides a means of determining planets' relative locations, and thus knowing the travel time between worlds. 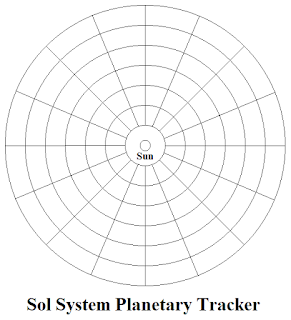 For players and GMs who want more precision, however, refer to the accompanying diagram. At the start of a campaign, each planet is placed in a position of its orbit, at the GM's discretion. Then, as time passes, the planets move through their orbits at the following speeds.
GMs are free, of course, to make this system even more precise by breaking down those periods into smaller increments; for example, Homeworld could move half a step every twelve days.

To determine the amount of time for an interplanetary voyage, then, just use a straightedge to connect the planet of origin and destination. Every space through which that line passes represents five days of travel time. While this might seem a little skewed as one moves further away from the sun, it reflects the fact that aetherships gain speed as they move away from the gravitational influence of Sol.

For example, if Thunar and Kronos stood on opposite sides of the sun, then a line between them would pass through twelve spaces; the duration of that voyage would be 120 (12 x 10) days.

Posted by Nate Christen at 6:39 PM