The Fire Giants of Wodan

This post is the first in a series that describe the fire giants who inhabit the planet Wodan. 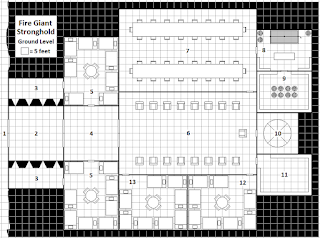 The Giants of Wodan
Although the sun-scorched surface of the planet Wodan is not habitable for many living things, this world is home to a notable band of fire giants, who reside in a stronghold cut from the mountainside.
1. Front Gate
Massive iron double doors (hardness 10 and 180 hit points), each ten feet wide and twenty feet tall, seal the entrance to the fire giants' stronghold. What is more, they can drop an iron bar in behind it, thereby increasing the DC for breaking down the door from 30 to 40.

2. Gauntlet
The walls of this room are cut by arrow slits, providing a place from which the fire giant warriors can defend the stronghold. These gaps are some four inches wide at their narrowest, and run all the way from the floor up to ceiling, which is twenty feet high. On the inside wall of this room is another door similar to the front gate.

3. Defensive Positions
This narrow passage provides access to the other side of the arrow slits, each of which is five feet wide at the widest. There are also doors leading into the guards' barracks (area 5, below).

4. Entrance
Visitors to the stronghold are received here by an escort, usually two fire giants and sometimes more depending on dangerous they seem to be. The double doors on its inside wall are not built to be sealed against intruders. It is otherwise featureless.

5. Guard Barracks
Each of these two rooms is filled with eight large beds, arranged around the walls. There is also a table and chairs at which the fire giants lounge while not tasked with other duties. Beneath each of their beds the warriors keep footlockers that contain extra clothing and various personal items. Each room provides quarters to seven normal fire giants and one strongarm, who acts as a sergeant. At the GM's discretion, there could be some valuable items among the otherwise mundane possessions.

6. Throne Room
Two rows of large chairs face each other along the length of this broad, open chamber; at their head stands one that is even taller and more ornate. That is where the fire giants' leader (a magmablade) receives guests and makes pronouncements to his underlings.

7. Dining Hall
A pair of long tables, each surrounded by chairs, dominate this room. Here the fire giants take their meals, and at any given time there's the chance that a few guards, who've recently finished duty, are having a bite to eat here.

8. Kitchen
A massive hearth with a roasting spit fills one wall of this room; there is also a broad table for preparing food, along with barrels of fuel and beer, and shelves filled with cooking implements and other supplies. One or more ettin servants can generally be found here, preparing the next meal for the stronghold.

9. Pantry
Shelves line the walls of this room; they are laden with all manner of foodstuffs, along with more barrels stacked on the floors beneath them.

10. Stairway
This spiral staircase leads up to the watchtower, as well as down to the level below.

11. Storage Room
Another room that is lined with shelves, this one contains extra chairs, linens, tapestries, torches and the like, all things that the ettin servants use to keep the stronghold in good order.

12. Servants' Quarters
This room is also filled with beds, for use by the eight ettin servants. Typically, half of them can be found here, resting, while the others are working.

13. Guest Room
Furnished much like the ettin's quarters, this room is kept for those rare occasions on which visitors come to the stronghold.