Although I was by and large satisfied with the material I wrote about the Crossroads asteroid colony, one element that I always wanted to expand upon was the tunnel system inside it. At long last, I've done so. Presented below is a map of the tunnels, along with area descriptions and suggestions for stocking them with enemies for an adventuring party. Additionally, I've updated the PDF version of the compilation for Crossroads, which is available in my Dropbox. 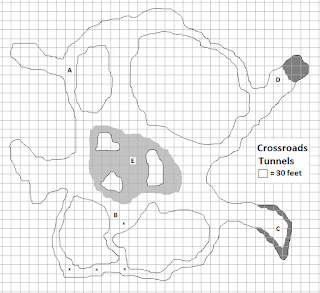 10. The Tunnels
Those who are familiar with the history of Crossroads know that the asteroid was once mined by dwarves, but they sold it to Luciano Reda after the veins of ore stopped producing. What most people don't know, however, is that those mines aren't entirely empty. There are rats, of course; that's no surprise, but other, deadlier things lurk here, too. The exact nature of what's inside is left for the GM to develop.


A. Entry
The entrance to the tunnel system is located on the western side of the asteroid (that is, when one considers the docks to lie on the south end), right around its centerline. In order to keep people from wandering into the tunnels, the powers that be have covered the entrance with a permanent image that disguises it as just another part of the rock's face. Those who encounter the illusion may attempt a DC 20 Will save to recognize its falsehood.

As a general rule, tunnels are about as half as tall as they are wide. In that way, the narrower passages range from ten to twenty feet in height, while the larger caverns rise up to a hundred feet in height or more.

B. New Diggings
Those who succeed at DC 15 Knowledge (dungeoneering) or (engineering) checks may notice that one part of the tunnels has been more recently dug—that is, within the past few months. A similar Knowledge (local effort) reveals that this section passes underneath some of the settlement's notable buildings, including the Sign of the Ourobouros, the Crossroads Outfitter, the R.I.C. warehouse and the home of Governor Luciano Reda. At the GM's discretion, there might also be tracks in the area (that one can find with a DC 20 Survival effort) that could lead to the responsible party. Just what that character intends to do, however, is left open to interpretation.

C. Fungus Farm
The tunnel leading to this area slopes downward, and the walls here are slick with moisture. What is more, a tremendous variety of fungus lines the floor and walls of the area. While many of these growths are harmless—and, according to many halflings, delicious—some are downright deadly. That latter group could include violet fungus and shriekers, and possibly even phantom fungus or mindslaver mold.

D. Cess Pit
Over time, those who have made use of these tunnels—smugglers, thieves and the like—have dumped their rubbish here. Now one end of the tunnel is filled with years' worth of rusting and rotting detritus. The pile is also home to various vermin, such as centipedes and rats, and possibly including other, even more dangerous creatures.

E. Underground Lake
What from the settlement on the surface of the asteroid has trickled down through the soil and rock to form a pool here. Although cold, the water is clean and safe for drinking. At the GM's discretion, it could contain living things, ones that run the gamut from harmless cave fish up to aquatic snakes, giant frogs or even some electric eels.

Posted by Nate Christen at 3:24 PM