This post is my second attempt at writing a traditional tale in the Homeworld setting, a story that explains one of the world's religious beliefs and that provides a hint at future events. 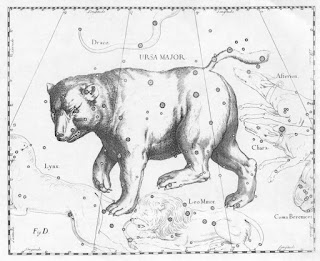 The Tale of the Bear Spirit
“Among the rugged folk who dwell in the far northern regions of the world, amid the endless snow and ice, there is plenty of time for telling stories around the hearth-fire. One of those tales is a curious take on the history of aetherial travel.

“Those people, who appear rather primitive when judged by more civilized standards, claim that it was not the long-lived elves, nor even the steady dwarves, who first dared to pilot an aethership up, into and beyond the heavens. Rather, they say, it was their own folk.

“I know that it may sound preposterous; even so, they believe it. Those people, who subsist by hunting seals and other animals, as well as fathering other foodstuffs when possible, believe that, due to their unusual natures, they feel a powerful draw toward Luna. What is more, they assert that, long ago, they were visited by a messenger sent by that goddess.

“They say the messenger came seeking warriors to help battle a menace from the beyond the heavens, and enemy they call the furmah. Dozens of their strongest and bravest volunteered for the undertaking, possibly in the hope of meeting Luna herself.

“Those who remained behind in the villages never saw their kith and kinfolk again. Even so, they say that the messenger returned, and told them that the heavenly powers wished to offer them a sign of gratitude for the warriors' sacrifice. They declared that a certain group of stars, always visible in that region's night sky, should ever after be known as the Great Bear, and would watch over their people for the rest of time. That, then, is the origin of the entity they refer to as the Bear Spirit, the patron and protector of their folk.”

-Recounted to High Priest Imhotep by Yusuf the Traveler

Posted by Nate Christen at 4:47 AM