A previous article presented the interstellar portal, a device that can be towed behind an aethership to facilitate travel between the stars. Detailed here is the vessel that the elves generally use for towing it, the arkship.

To look at the interstellar portal, please check out this link.


This huge aethership is some 250 feet in length and 70 in width. Rather than having numerous cabins and compartments of predetermined sizes, it provides an open, modular structure that allows captains and crews to customize the layout based on the combination of passengers and cargo that they're carrying. This is especially important when they are loaded with various plants and animals, helping to establish settlements on far-flung alien worlds. 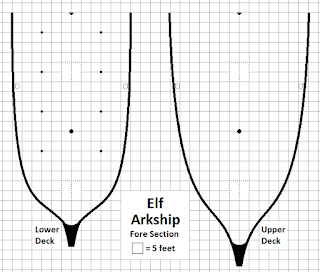 Upper Deck
The arkship's upper deck is a broad, open space. It boasts three masts—mizzen, main and fore. Spaced across the deck are four ten-foot-by-ten-foot cargo hatches that provide access to the lower deck. There are also four ladderwells for crew members to use. Both fore and aft the ship's keel projects upward, in a manner similar to a Viking longship.

This deck is most commonly loaded with planter boxes containing all manner of trees, shrubs and other such greenery. Note that arkships don't usually carry armaments, but rather are accompanied by elven galleons for protection during their interstellar voyages. They do generally carry one or two aetherial longboats that they can use for shuttling crew members back and forth between the escort vessel as well as the interstellar portal, thereby allowing them to visit friends and family who've stayed back home. 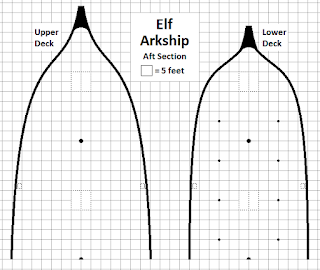 Lower Deck
Only slightly narrower and shorter than the upper deck, this level also features a series of support struts to which additional bulkheads can be attacked if there is need to compartmentalize the hold. In this way the lower deck is often divided into pens for different types of animals, along with sections that are filled with barrels, crates and other containers. Some crew members string up hammocks on this level, while others sleep in the open amidst the plant life on the upper deck.

Posted by Nate Christen at 8:16 PM