As I've been reading about pirate history, I've come across references to a number of usual incendiary devices. Knowing what kind of fun they could add to a combat, I've written some stats for them. 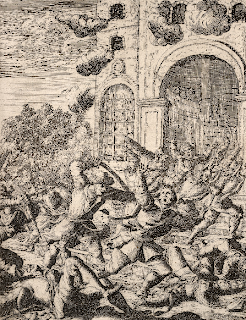 Unusual Equipment
Pirates are innovators of violence. They are willing to experiment with any tactic that could provide quick and easy victory; for that reason, they are more likely to try out new types of weapons than are members of official military organizations. Detailed below are a few of the ingenious device they are known to have used.

Smoke Pot
This pot, containing a variety of combustible materials such as lamp oil and gunpowder, creates thick, opaque smoke starting one round after it is ignited. The smoke fills a ten- foot cube (treat the effect as a fog cloud spell). The pot burns for five rounds, and the smoke dissipates naturally at a rate determined by the strength of the prevailing winds: five rounds for no wind, two rounds for a light breeze and one round for stronger winds.

Stink Pot
This item functions in the same manner as a smoke pot, but the addition of caustic material such as sulphur (more commonly known as "brimstone") gives the smoke an acrid, cloying smell. For that reason, characters caught in it must make a DC 11 Fortitude save or become nauseated. This nausea lasts as long as the victim remains in the cloud, and for 1d4+1 rounds thereafter.

It is said that Blackbeard once prepared items such as these and ignited them in the hold of his own ship, daring other crew members to last as long as they could in such hellish conditions.

Fire Pike
The buccaneers somtimes uses these weapons, which augment a normal boarding pike with a jar of combustible materials on the end. Because this makes the weapon awkward to wield, the user suffers a -4 penalty to hit with it. On the first successful hit, however, the target must make a DC 10 reflex save or be lit on fire, suffering an additional 1d6 damage per round. Should that occur, the victim can make use a full-round action to make a DC 15 Reflex save to put out the flames, with a +2 bonus for falling prone and rolling on the ground. Of course, trying to put out the fire grants opponents an attack of opportunity.

Note also that, if the wielder of the fire pike rolls a natural 1 to hit, that character must make the Reflex save to avoid being lit on fire.
Posted by Nate Christen at 3:18 PM