Building on yesterday's post, here are rules for a game within the game. 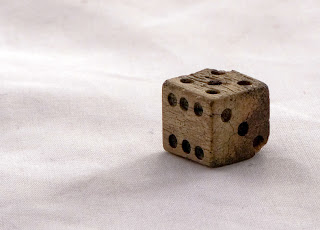 Passage
In his book How History's Greatest Pirates Pillaged, Plundered and Got Away with It, Benerson Little asserts that a favorite dice game among pirates was one called passage. While there are some different variations known, presented here is a more streamlined version.

A dice game such as this can be useful in a number of ways. For one thing, the players and GM can always throw some dice for in-game money while waiting on others. Alternately, the game could be part of an encounter while the PC's are meeting an important contact. Against a particularly ambitious or reckless NPC, the stakes could become very high indeed.

1. Each of the players involved antes a certain bet, such as one piece of eight.

3. The player with the lowest opening total then rolls one die to "set the point;" that becomes the number needed to score points for future rolls during that game. (In the event of a tie, the two tying players can roll off against each other.)

4. The player with the highest opening roll starts playing by rolling both dice. That player scores one point for each die that matches the "point" number, and three points total if both dice in one throw match it.

5. Play proceeds around to the left until one player scores eleven points, at which time that player wins the pot.

Posted by Nate Christen at 6:25 AM