Mapping a Campaign
In a previous post, "Acts of Faith," I mentioned that I like to write about my characters. The example there was a short story meant to capture some of the personality of a character, as well as to explain why he would have the Enemy fortune. I also tend to take detailed notes about adventures, tracking important encounters and recording details that might become important in the future. For characters from longer campaigns, I have pages of notes to chronicle events, and refer back to them when needed.

In a similar vein, in the Interlude "The Refitting" I mentioned that a source of considerable outside-of-play activity was customizing the deck plans for the party's ship(s). This helped to create a sense of investment, and provided a clear mental image of such an important location. Thinking about these elements, it occurred to me recently that, in a pirate-themed campaign, it would also be fun and even useful if somebody used a map to keep track of the party's movements. This notion is inspired in part by the film Raiders of the Lost Ark, in which the hero's travels are represented between scenes spanning the United States, Nepal and Egypt.

Consider, for example, the adventures presented in the Come Hell and High Water campaign. During the second one, "Reprisal," the PC's have a chance to acquire a small pirate sloop, the Oppotunity. After that, "Out of the Darkness" takes the party to a plantation on Hispaniola and thence, in all likelihood, back to Jamaica. Tracking these movements on a map would look something like this. 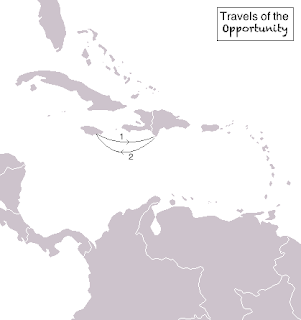 There are plenty of good maps available online for use. Some are simple and plain, like the one taken above from

Using a map in this way provides a number of benefits. One is that it helps give the players a more solid mental picture of the places their characters have visited and how they fit together into the world of the campaign. Another is that it can help the GM keep track of the time needed to cover such distances; this is especially the case if one is enforcing rules regarding provisioning and the like. Finally, of course, it helps create a record of the adventures for years to come.
Posted by Nate Christen at 5:58 AM