Sometimes an idea just flows. This is delightful for a writer, of course, and helps make up for the time when the words don't come so easily. In the case of this Interlude, what started as a pragmatic element for a campaign turned into what could be the seed for an entire adventure.


Interlude 38: The Outfitter
As the PC's advance in their careers as pirates, chances are good that they'll need to buy supplies for their voyages. When that happens, they'll need to find a source of provisions, equipment and other such things. Of course, this purveyor could also become a liability. This interlude deals one such merchant, who does business without asking questions and has secrets of his own to keep.
Alec Robertson (Lester Newman)

Alec Robertson, as he is now known, is a successful shopowner who sells supplies and equipment to ships' crews in Port Royal. As far as the other townsfolk are aware, he is the nephew of the shop's former owner, Anthony. The story goes that Alec came out to Port Royal from England to work for his uncle, shortly before that fellow's untimely death. Alec's father was Anthony's brother, but the younger man had been left as an orphan in London after his father's death. When Anthony learned of this unfortunate event, he sent for his nephew in order to adopt him and take him as an apprentice.

What the people don't know is that Alec Robertson is actually Lester Newman, a thief who happened to be aboard the same ship as the real Alec Robertson was traveling to join his uncle. Lester managed to acquire the letter Alec had received, and from it learned that young Robertson had never actually met his uncle. Recognizing an opportunity, Lester befriended the young man and gradually learned of his story. Indeed, the thief subtly pressed him for as many details as possible, and then, once they reached Port Royal, offered to act as his guide. At that point Lester murdered the young man and then assumed his identity, sought out the uncle and usurped the dead man's position.

The rest of the story, as they say, is history. Anthony Robertson didn't have much time left on this earth, and before long the new apprentice gained control of the shop. He now lives as a respected merchant in the town, but, if anyone should ever threaten to reveal his secret, he would show his true colors again. 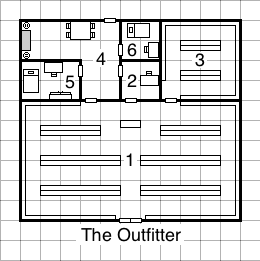 The Outfitter's Shop
This building is a story and a half in height.

1. Main Room
The walls of this area are lined with shelves, and several free-standing units are arranged in two rows in the middle of it. Here are displayed the various wares that Alec sells, for the perusal of customers. Most of the items in the Skull & Bones rulebook can be found here, at the GM's discretion.

2. Office
A heavy oak desk dominates this room. It is here that Alec keeps his ledgers, along with an iron strongbox (hardness 10 and 20 hit points; DC 30 to open or break) containing the store's accumulated profits, to the amount of 500 poe in mixed coins.

3. Storeroom
Extra goods are kept here for when shelves need to be restocked.

4. Kitchen
Alec and his hired help live in the store, as is not uncommon. To that end, there is a full kitchen with everything one might expect to find in it.

5. Alec's Bedroom
This is where Alec sleeps. As such, the room is furnished with a wardrobe containing various gentleman's outfits, a writing desck and a comfortable bed. Alec keeps his weapons here except when he has reason to suspect that he might need them. There's also another lockbox hidden beneath a loose board in the floor (DC 25 Search or Spot check to notice) that matches the one in the office.

6. Warren's Bedroom
Alec's hired help is a fellow named Warren Griffith, a rather taciturn but sensible man who helps deal with customers and watches the place when Alec is away. Indeed, Alec chose him because he seems almost completely unimaginative and has displayed no curiosity about his employer. This makes him an ideal associate in Alec's mind, for he poses no threat as far as discovering the truth is concerned. Rather, Warren loves nothing more than good food and drink, along with a pipe, after a day's work.


Using the Outfitter in a Campaign
Alec Robertson and his shop could be worked into a Skull & Bones campaign in a variety of ways; a few of the possibilities are detailed here.
Posted by Nate Christen at 10:16 AM