Review of the Astral Adventurers Guide

Like, I suspect, many other people, I went out and bought the new Spelljammer boxed set for D&D when it was released on Tuesday. Here are my thoughts and questions about the first book.

All in all, this book provides a lot of exciting content. It could certainly have gone into greater detail in some different areas, but I think it provides a solid framework on which to start building adventures and campaigns in Wildspace. 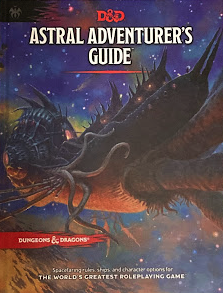 Posted by Nate Christen at 8:43 PM