RotLA and THA: History of the Indiana Jones RPGs

Since I've been discussing how to use Treasure Hunter Adventures material for adventures and campaigns set in the world of Indiana Jones, I thought it would also be interesting to look at the history of the actual Indiana Jones RPGs--one from TSR, and the other from West End Games. 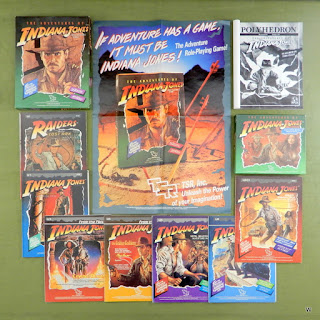 Wayne's Books already has a comprehensive history of the RPGs on their website, so I'll link to that instead of repeating it here. They are also the source for the image presented above, one that I had never seen before.
http://www.waynesbooks.com/IndianaJones.html
It's also interesting to see for how much some of those old books and boxed sets are selling. Oh, to have them back in shrinkwrap again!
Next, Wikipedia has articles about the two versions of the game. They are fairly brief, but do quote some of the reviews for the TSR version when it was published. It's interesting to note that they are lukewarm at best, in part because that game didn't have a system for generating original characters.
https://en.wikipedia.org/wiki/The_Adventures_of_Indiana_Jones_Role-Playing_Game
https://en.wikipedia.org/wiki/The_World_of_Indiana_Jones

I do have to wonder how a cohesive game based on the D6 System would have been received. That set of rules worked well for the Star Wars RPG, and seems to me like it would have handled pulpy adventures well, too.

Finally, here's a story that begins with the of TSR's version of the game. I'll let the website for the Diana Jones Award tell that story.

Posted by Nate Christen at 9:39 AM